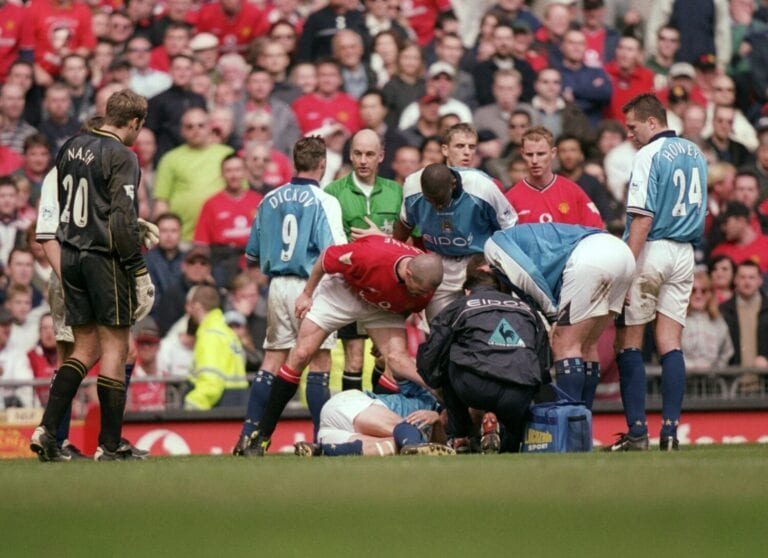 Bernstein, who was also chairman of the Football Association between 2011 and 2013, says he switches his television off every time the Irishman appears.

The tension between Haaland and Keane dated back to 1997, when Manchester United took on the Norwegian’s Leeds side in the Premier League.

With the clock ticking over into stoppage time, Keane went down alongside the Norwegian as the two men chased the ball, suffering what turned out to be a cruciate ligament injury after his studs caught in the turf.

What rankled Keane was Haaland’s immediate response. With the midfielder lying on the pitch, Haaland stood over him and suggested he was feigning injury.

Four years later, with Haaland now at Manchester City, Keane produced one of the most infamous tackles of all time at knee height on the Norwegian.

Bernstein says it was the worst action he had seen on a football pitch – and reserved strong words for Keane.

He explained to the Athletic: “I’ve never forgotten it. From a personal point of view, that was the worst individual thing I’ve been directly involved in, and the worst I’ve ever seen on the pitch.

“As a human being, it was an awful thing to see.

“It was a cold-blooded incident. I have never forgiven Keane for that.

“I think, frankly, it’s dreadful he’s accepted in football the way he is. After doing something like that, I think it’s absolutely appalling.

“Whenever Keane turns up on televsion, I switch off. I just won’t watch it. I’m appalled that he’s still involved with football. It’s just not right.

“Things happen, injuries do happen, but to do it deliberately and admit it the way he did, to sell his book, is completely beyond the pale.”

A passage in the Irishman’s autobiography portrayed the tackle as premeditated. But the book’s ghostwriter Eamon Dunphy, has admitted that he used his own artistic license on the paragraph in question. Keane did read the passage and allowed it to be published.

The aftermath of the tackle

After Keane’s tackle, Haaland completed the game and then started two further games – one for City and the other for Norway – that season.

He only played four times the following campaign after surgery on his left knee, and announced his retirement at the age of 30 in July 2003.

The Norwegian and City considered legal action against Keane, but a previous article published on Haaland’s website said that it was his troublesome left knee that caused him to retire – not the right knee that Keane had made contact with. He had been playing with the left knee injury for a number of months prior to the Manchester Derby.

The lawyers decided that there was not enough evidence to go forward with the case.

Alf-Inge is the father of Borussia Dortmund striker Erling Haaland – who has been linked with United on numerous occasions in recent seasons.