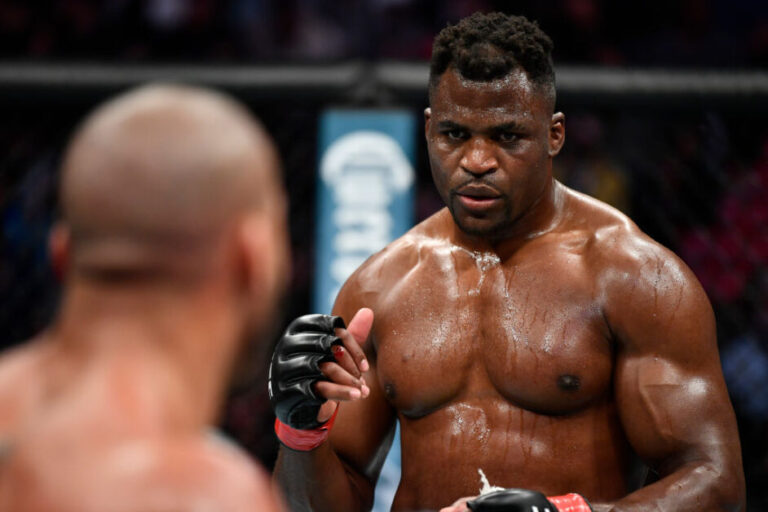 Francis Ngannou is searching for a new opponent for his next fight after his tremendous performance against Ciryl Gane at UFC 270.

‘The Predator’ struggled to cope with his opponent’s footwork early. But the 35-year-old overcame his poor start by utilising his newfound grappling skills.

However, he might not need them in the future. Ngannou has publicly announced that he’s unhappy with the money that the UFC is paying him. Therefore, there’s a chance that he could leave the sport altogether.

We don’t know which discipline the powerhouse will fight in next. So we’ve compiled a list of five opponents from the two premier combat sports who might love a contest with the ‘Baddest Man on the Planet’.

Jon Jones is one of the most talented athletes to have ever set foot in the Octagon. He’s capable of outstriking boxers, out grappling wrestlers and submitting the best BJJ practitioners on the planet. His fight IQ is simply off the charts.

Fans have eagerly anticipated Jones’ heavyweight debut since his last contest in February 2020. However, the UFC great has shown little ambition of setting foot back into the cage, and his recent misdemeanours away from the Octagon have only made his return more unlikely.

However, MMA enthusiasts haven’t given up hope of seeing this ‘dream match’. The controversial star has the skills, whilst Ngannou has the power. But we don’t know which one of them would come out on top until they finally share the Octagon.

Ngannou went back and forth with Tyson Fury on social media last week. And with the Cameroonian’s career in the UFC potentially at an end, this super fight would provide ‘The Predator’ with the biggest payday of his life. However, Fury is by far the most complex challenge available to him.

The 6ft 9in giant moves like a middleweight and has a far superior boxing brain than anybody else in the division. His elusive footwork would likely leave the UFC star hitting fresh air. But it only takes one punch, and Ngannou hits like a train.

Derrick Lewis holds a victory over the reigning UFC champion, and Ngannou wants his revenge. Most fans feel that the division’s king has evolved past Lewis now, but the Houston native believes he has the tools to do the job again.

Lewis is the only fighter on the roster that can match Ngannou’s power. And as he has proved throughout his career, you can never write him off.

There are entertaining match-ups, and then there’s this. ‘The Bronze Bomber’ might be the only man on the planet carrying more power than Ngannou. His right hand fires at an electric pace, rendering anything in its path unconscious. Similarly to the Cameroonian, it can be argued that Deontay Wilder lacks fundamental technique. However, this could make the fight even more entertaining.

The two most terrifying punchers on Earth would unload on each other with fearsome ferocity, leaving whoever takes the first blow out cold.

Granted, the 6ft 4in fighter’s last encounter with Miocic was anything but competitive. But so was their first fight, and Ngannou still got a rematch. Therefore, there’s no argument to suggest that the Croatian-American doesn’t deserve another opportunity at the belt.

Miocic is one of the greatest heavyweights of all time. He’s proved on many occasions that he can beat the odds. He lasted less than a single round in his first contest with Daniel Cormier. But in the rematch, he stopped the former Olympian.

Ultimately, the score is still tied, meaning the grudge can’t be considered settled unless Francis Ngannou picks Miocic for his next fight.