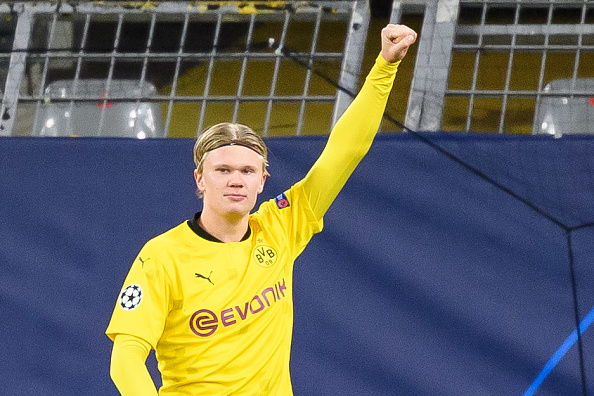 Golden Boy winner, Erling Braut Haaland is back in the Borussia Dortmund squad today after a month out with injury.

The teenage sensation picked up a hamstring injury in November 2020 which has seen him ruled out of Dortmund’s team up until today.

Dortmund face off against Wolfsburg this afternoon and need to win get back on track in the league.

The Twitter world has welcomed back the youngster as many are excited to see Haaland’s return.

The Norwegian international had a meteoric rise in 2020 as he went from banging in goals in Austria to becoming one of the world’s most lethal strikers in under 12 months.

Apart from the strikers interview skills he is pretty much the full package.

The finishing ability of Haaland is quite remarkable and he scores many different types of goals with his killer instinct.

He was awarded the prestigious Golden Boy award for his displays at Salzburg and Dortmund last year.

Many thought that stepping up from the Austrian Bundesliga to Germany would be a challenge for Haaland. The striker demonstatred that he was up for the challenge instantly and scored a hattrick off the bench on his debut.

Haaland has continued his phenomenal form this season. He currently sits second in the golden boot race in Germany with ten goals despite playing only eight Bundesliga games. He has also been ruthless in front of goal in Europe with six goals in the Champions League.

Future for the Golden Boy

Erling Haaland is one of the brightest prospects in world football. Despite only being at Dortmund for just a year some of Europe’s best clubs have already been rumoured to be linked with the young striker.

Dortmund have failed to hold on to their best stars in the past, but the clubs sporting director Michael Zorc believes that Haaland has a long-term future with the club.

Wherever Haaland ends up in the future one thing is certain…GOALS!

How good do you think Erling Braut Haaland is? Let us know @sporf on Twitter.