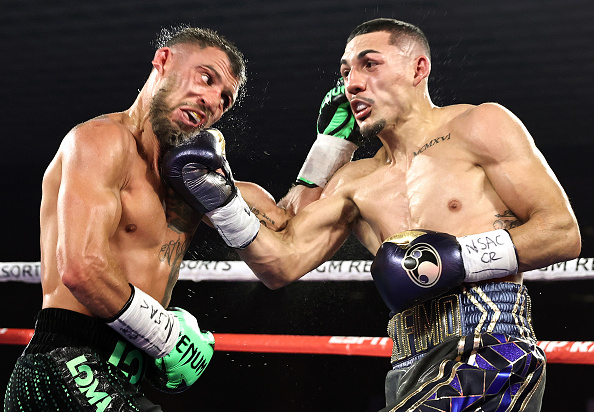 The lightweight division in boxing may be one of the most stacked weigh class around.

The division was shaken up in October when 23-year-old Teofimo Lopez unexpectedly defeated the great Vasily Lomachenko to become unified Lightweight world champion.

The four title holders have a combined record of 86-0 as pros. 68 of the 86 wins have been knock-outs. As they clash in the future surely some of them will have to lose their undefeated record.

All four of these men have long careers ahead of them as they are all aged between 22-26. This is remarkable for a group of world champions.

The young American was huge underdog coming in against Lomachenko in October. He was victorious however establishing himself as the top dog in the division in the process.

As a result of the win Lopez became the youngest four belt champion in boxing history.

Lopez record currently stands at 16-0 with 12 knockouts. He has now earned the right call the shots as he will undoubtedly be the A-side of any event.

The oldest of the current champions at 26, Davis is 24-0 with a stunning 96 percent knockout rate.

The fighter is mentored by Floyd Mayweather and has had a lot of success under the steward ship of the legend. Mayweather hailed Davis as one of the most exciting prospects in the sport.

Davis is a four-time world champion, and in two weight classes.

The American has been around since 2013 and his scary punching power has seen him become a feared opponent.

The 22-year-old won the vacant interim WBC world championship in 2019 but was promoted to the status of full champion shortly after.

Haney is currently 25-0 with 15 fights ending by stoppage.

‘The Dream’ has been linked with a possible clash with Lomachenko recently. This would be the biggest test of his career so far.

Ryan Garcia has been a superstar on social media for a number of years. In the boxing world however, some people may have questioned if Garcia would be exposed at a high level.

He proved the doubters wrong last night as he got up off the canvas to defeat 2012 Olympic gold winner Luke Campbell. Garcia showed heart and had his chin chested before landing a ruthless body punch to end the bout.

Garcia has now called out the three men who hold the other belts in the lightweight division.

Four Americans currently dominate the division and a few other boxers from across the world will want to end the dominance on the division.

Vasyl Lomachenko will surely want to bounce back from his defeat and look to regain some of the belts he once owned.

Lomachenko is a former three weight world champion and is still ranked as one of the best P4P fighters on the planet.

The Australian targeted Lomachenko before he was defeated but now a unified world title fight against Lopez looks very likely.

George Tennyson has really impressed since his move up from featherweight. The man from Belfast has bulldozed his way to a ranked position in 3 of the 4 major governing bodies.

The Northern Irish fighter fell short of a super featherweight world title against Tevin Farmer in 2018.

Many believe that Tennyson’s power and relentless pressure could cause problems for the men at the top of the lightweight world.

The division is hotting up massively with so many talented fighters competing for the top prizes.

Who do you think is the best lightweight on the planet? Let us know at @sporf on Twitter.