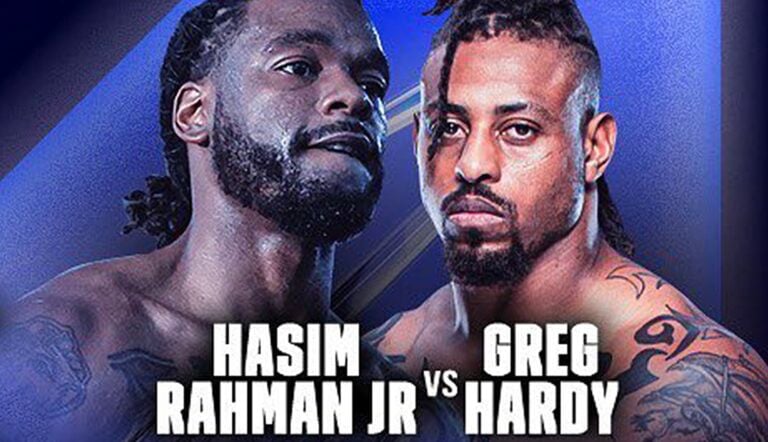 After Vitor Belfort tested positive for Covid-19, Hasim Rahman Jr needed a new opponent, and he’s found one in the form of Greg Hardy.

And while the former NFL star might not have the striking prowess of the original headliner, he certainly has the size on his side. Weighing in at a whopping 324 pounds, the 34-year-old will present an interesting test to the son of the former heavyweight world champion.

In 2018, the powerhouse embarked on a new journey after domestic violence charges left his football career in tatters. With his reputation at an all-time low, he transitioned into MMA and put together a 7-5 record before UFC President, Dana White, chose against renewing his contract.

Consequently, the 38-year-old turned to boxing and recorded his first win on October 8 against Mike Cook. However, the man who will stand in front of him on Saturday night, will make for a much tougher challenge.

Rahman Jr hasn’t taken his career overly seriously, but he still has significantly more experience than his opponent. Having amassed a professional record of 12-1, the American, on paper, should win this contest fairly comfortably.

However, ‘Gold Blooded’ hasn’t competed since a damaging fifth-round knockout at the hands of Kenzie Morrison. Therefore, If Rahman is struggling with the scars of defeat, his much bigger adversary could take advantage, making this a very intriguing collision.

The lifelong boxer was scheduled to face Jake Paul in August, before the bout fell apart due to weight issues. So after a career that’s failed to catch fire, Rahman knows his deal with KSI’s promotional team is his last chance to make a splash in the sport. But does he have the minerals to step out of his Dad’s shadow? We’ll have to wait until the weekend to find out.