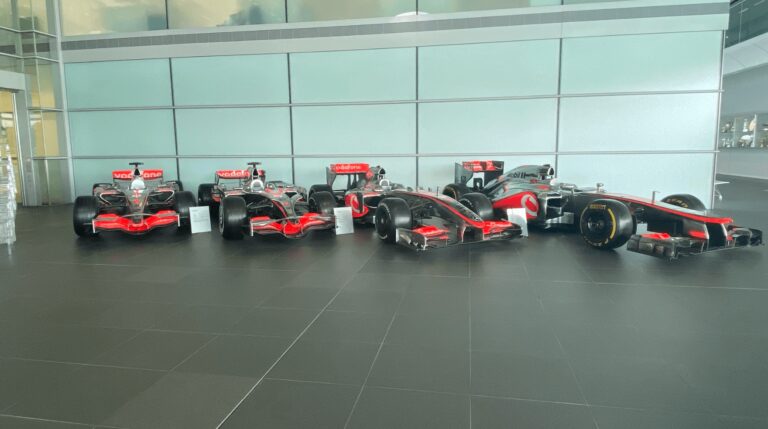 The McLaren Technology Centre, which is situated in Woking, is the headquarters of one of the biggest teams in motor racing.

Around 1,000 people work in the building, which McLaren use to test new aerodynamic parts and setups, and operate a wind tunnel.

The building is somewhat tucked away on the outskirts of Surrey, almost a separate entity to the racing team, which usually operates thousands of miles away on Grand Prix weekends.

Last weekend, however, Team McLaren were much closer to home. Whilst Daniel Ricciardo and Lando Norris were competing at the British Grand Prix at Silverstone, the occupants of the McLaren Technology Centre were situated around 80 miles away. Some of them were informing race strategy, and chatting with engineers whilst the high-octane racing action was ongoing.

On Sunday – race day – Sporf were given special access to the McLaren Technology Centre, thanks to the team at Gopuff. Gopuff are an instant goods delivery service, who signed a multi-year agreement to become an Official Partner of McLaren in 2021.

We were in the perfect position to watch the racing and strategy unfold.

As well as that, we also had the opportunity to glance at the history of McLaren through the team’s classic and current cars.

From the car that the team’s founder, Bruce McLaren, drove to his first career win, aged 15, in 1954, all the way to the 2021 challenger driven by Ricciardo and Norris, here is a history of McLaren through the ages:

Although not an actual McLaren car – the team itself was only founded in 1963 – this is the first race-winning car driven by Bruce McLaren. The New Zealander went on to found the team.

McLaren was just 15 when he won his first-ever race in the Austin 7. His father, Les, bought the car in 1952 for the sum of $110. Bruce then helped him put it together. He convinced his father to let him race it – and the rest is history.

Bruce McLaren went on to have a successful career in F1. He won four races, taking his first victory at the 1959 United States Grand Prix in Sebring, Florida.

He also won the 1966 24 Hours of Le Mans. Tragically, however, McLaren passed away at the age of just 32 in 1970 after crashing his Can-Am car in testing at Goodwood.

French driver Alain Prost won three Drivers’ Championships whilst with McLaren. His 1989 car is on display in this section of the McLaren Technology Centre.

In 1989, Prost’s MP4/5 won the title by 16 points ahead of team-mate Ayrton Senna – but it is a figure that doesn’t tell the story. At Suzuka, the two team-mates – and fierce rivals – crashed at the chicane on lap 46, with Prost forced to retire. Senna was able to rejoin the track and continue, and thought he had won the race to take the championship into the final round.

However, the Brazilian was infamously disqualified for missing the chicane. That meant Prost took the title in controversial circumstances.

Five years earlier, in 1984, Prost teamed up with Niki Lauda at McLaren. Lauda, who rejoined the sport in 1982 after retiring three years earlier, won an emotional Drivers’ Championship. It was his third title.

The Austrian achieved it in dramatic circumstances. He finished second in the final race of the season in Portugal, with Prost winning. Lauda took the title by half a point ahead of his team-mate. But Prost’s time would come.

Next is the 1998 car belonging to the ‘Flying Finn’, Mika Hakkinen.

Hakkinen won four of the first six races of the season, recording pole and fastest lap in each of those wins. But he and McLaren had to hold off a mid-season charge from Michael Schumacher and Ferrari, who won four of the next six races themselves.

It all boiled down to the final race of the season in Japan. Hakkinen held a four-point advantage over his German rival. Schumacher gained the advantage, qualifying on pole. But he stalled on the grid, with Hakkinen taking an easy victory to claim his first world title.

Since making his F1 debut in 2007, it was taken as a given that Lewis Hamilton would eventually win a Drivers’ Championship. However, no-one expected it to unfold as it did in 2008.

Locked in an enthralling battle with Felipe Massa that lasted most of the season, Hamilton arrived at the final race in Interlagos, Brazil, knowing that fifth place would be enough to secure his first title.

Incredibly, in inter-changeable conditions, the title battle went to the last lap, and the final corner. Hamilton was in sixth, having pitted for wet tyres shortly before the end of the race. As conditions seemingly were not worsening, his fans were resigned to Massa winning his first world championship.

The Brazilian crossed the line in first, with his Ferrari team convinced he had done enough. But the heavens had already opened, and those who had gambled on staying on dry tyres, including Toyota’s Timo Glock, began to struggle. Hamilton overtook him on the final corner of the last lap to secure an impossible triumph.

The livery on show in the McLaren Technology Centre is the ‘Gulf’ livery that adorned the car in Monaco. Lando Norris secured a third-place finish on it, recording his first Monaco Grand Prix podium. The livery has not been used since. Therefore, it has a 100 per cent podium finish record.