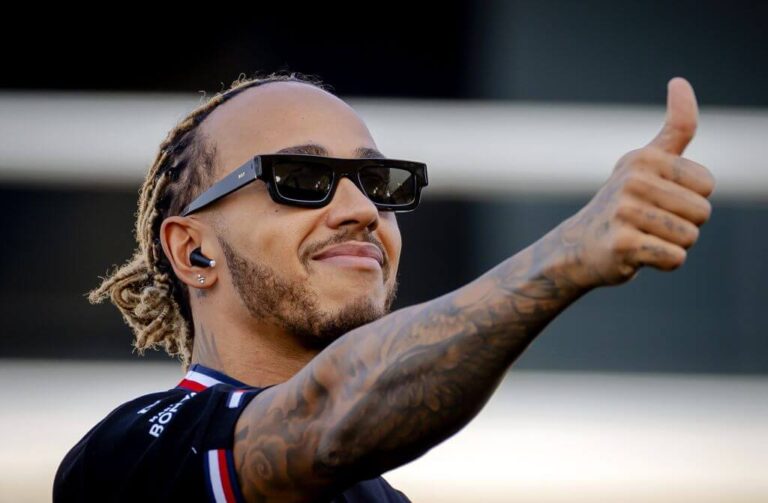 Lewis Hamilton has achieved an incredible amount during his Formula 1 career. That has led many fans to debate the question – is Lewis Hamilton the best of all time?

There are, of course, numerous criteria available to back up the argument that Lewis Hamilton is the best of all time. Whether you judge a driver by pure statistics, driving style or flair at the wheel, Hamilton has to be close to the top – if not at the very top – of everyone’s lists.

Let’s take a look at the facts and statistics:

There is no Formula 1 driver better than Lewis Hamilton when it comes to statistics.

The Mercedes driver became the first to record 100 wins when he secured victory at the 2021 Russian Grand Prix in Sochi last year. He has 103 wins as of the 2022 Saudi Arabian Grand Prix.

Hamilton also holds the record for most pole positions (103), wins from pole position (61) and podiums (134). He is also the driver with the highest number of wins in consecutive seasons, having won a race in every season since his F1 debut in 2007.

The other key statistic that symbolises Lewis Hamilton’s achievements is the seven Drivers’ Championship titles that he has won. That figure is a joint record alongside Michael Schumacher.

Had it not been for the controversial finish to the 2021 Abu Dhabi Grand Prix, we would now likely be viewing him as an eight-time world champion. He would hold the record outright.

One of the main issues when discussing the greatest Formula 1 drivers of all time is that comparisons between eras can be complicated. F1 cars have changed considerably over the years, meaning comparing Hamilton to a Juan Manuel Fangio of the 1950s, Jim Clark in the 1960s, or even an Ayrton Senna of the 1980s and 1990s, is a challenge.

The main reason behind that is that fans cannot know how any of the drivers mentioned above, or any others from those eras, would have handled modern F1 cars.

In the early seasons of F1, only eight to nine races were contested. Clark, for instance, won 25 races during his career before his untimely death at the age of 32 in 1968. But the Scot only competed in 73 Grands Prix.

However, when it comes to comparing different eras, statistics are the main tool we have for comparison. In 2020, Formula 1 sponsor Amazon Web created a study comparing the qualifying performances of top drivers from 1983 onwards. Senna came in first place, with Hamilton 0.275 seconds behind. Between them was Michael Schumacher.

What have other drivers and F1 personnel said about Lewis Hamilton?

The greatest of all time argument has always been hotly debated amongst F1 personnel. Schumacher, Senna and Hamilton are always at the forefront of any discussion. So are the likes of Fangio and Clark.

Three-time F1 world champion, Sir Jackie Stewart, said in 2020: “Juan Manuel Fangio, in my mind, is the greatest F1 driver that’s ever lived, with Jim Clark as the second greatest, even ahead of Senna.

“These people only raced, maybe sometimes six to eight or nine races a year in Formula 1 … Lewis or any of the other top contenders today are doing 22 races or 21 races, but only in Formula 1. Not in touring cars, not in GT cars, not in IndyCars nor in Can-Am cars, so, therefore, you can’t really compare.”

Meanwhile, former chief executive of the Formula One Group, Bernie Ecclestone, believes: “I believe that Alain Prost was the best. He had to drive with a lot of difficult co-drivers, and when the race started, he was on his own and had to look after the tyres and everything else. These guys today are fortunate in that they got more information over the radio than they should.”

A former team-mate of Senna at McLaren, Gerhard Berger, told Autosport: “I still put Senna as number one because the charm of Senna and the personality of Senna was another level. But on the sporting side, I think Lewis is as good as Senna was.”

Nico Rosberg takes a different view. He was Lewis Hamilton’s team-mate at Mercedes between 2013 and 2016, winning the Drivers’ Championship in the latter year. He explained: “Lewis is just an extreme natural talent. In terms of talent, he must probably be the best ever. And he really builds on that. That instinct is phenomenal with him.”

Is Lewis Hamilton the best of all time?

Based on the available data and Hamilton’s driving style and pure consistency, there is a strong argument for Lewis Hamilton being the best driver of all time.

Hamilton has won world championships for two different teams. In addition, despite the fact that he has always been entrusted with a top car for those title wins, he has always extracted the maximum speed out of the available machinery. And that particular criticism doesn’t really stand up – the best drivers are given the best cars to race.

Hamilton does not have the greatest win-to-race percentage in Formula 1 history. But the other stats do not lie, and the Brit’s ability to break records season after season has differentiated him from others. At 37 years old, he shows no signs of slowing down just yet.

Another factor that separates top drivers from the rest is their ability to produce incredible performances regularly. In 2008, for instance, Hamilton took on a rain-drenched Silverstone. He lapped every driver, bar two, in one of the most impressive displays in F1 history.

There was also his famous 2017 qualifying lap in Singapore, his storming drive to win his seventh world title in Turkey in 2020, and his regular battles with Nico Rosberg.

However, the same can be said for many others. Ayrton Senna was noteworthy for his ability to extract more than 100 per cent out of every car he drove.

In 1984, Senna dragged his uncompetitive Toleman car to second place at Monaco – one of the most challenging tracks on the calendar. The car had no right to be in that position, but the Brazilian made it happen.

Then, of course, there is Michael Schumacher. The German led Ferrari‘s return to the sport’s summit between 1997 and 2006, winning five world championships. His remarkable consistency and speed were what took him to the top.

When he returned from six races out following a broken leg in 1999, for instance, he promptly qualified his Ferrari on pole in Malaysia. He was a second quicker than anyone else.

Ultimately, the ‘GOAT’ argument is one that fans love to debate in any sport. When it comes to F1, however, it is incredibly tough to definitively answer.

Opinions will potentially differ depending on age group – older F1 fans may point to a Senna or Prost as the greatest ever. Newer fans may say Schumacher or Hamilton. There will never be a complete agreement across the F1 universe. But Hamilton has a lot of factors in his favour.