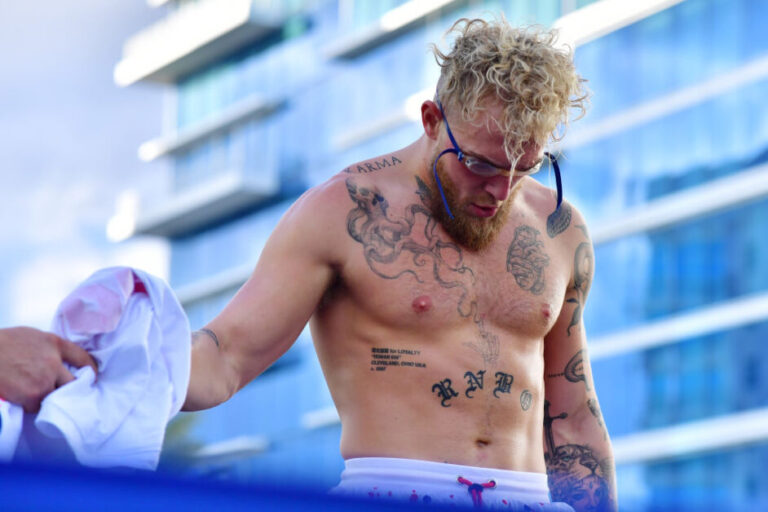 Jake Paul has been criticised by some hardcore boxing fans who don’t believe that he deserves to be headlining the events that he is. But similarly to Floyd Mayweather, the YouTuber’s divisiveness is helping to generate his vast net worth.

The 24-year-old was scheduled to return to the ring this weekend against Tommy Fury. It would have been an absolute mega-fight. However, the Brit had to withdraw from the contest due to a broken rib sustained in sparring.

Combat sports enthusiasts around the globe were devastated to have lost the much-hyped bout. But luckily for them, the ex-Disney presenter has found a replacement for the younger brother of the heavyweight champion of the world.

On December 18, Paul will face off with Tyron Woodley in an eagerly anticipated rematch.

The fight is highly intriguing. Fans can only ponder over the last bout and hope Woodley lets his hands go on Saturday night. But the reality is that with an extra training camp under his belt, the Cleveland native will have drastically enhanced his skills.

The controversial social media star is one of the most engaging characters on the planet. Whether you love him or hate him, you’re tuning in to watch. But how did the American make so much money?

Who was Paul before boxing?

According to Celebrity Net Worth, ‘The Problem Child’ has accumulated a value of $30 million. He began his career by following in his brother Logan’s footsteps by posting videos on Vine.

Following his success on the platform, Paul bagged a job as a children’s TV presenter on Disney. But this role was short-lived as the channel fired him in 2017. The American had been the subject of several controversies that didn’t reflect well on the network’s image.

He had received public complaints from his neighbours about wild parties, pranks and fire hazards. In addition, he was responsible for an enormous crowd of young fans gathering in the street outside of his house after he revealed his address on social media.

In an interview with The Hollywood Reporter, the boxer claimed that he was relieved from his role at Disney due to the mass media coverage of his wrongdoings.

However, this all played in his favour as the videos from the events generated huge numbers. As per Celebrity Net Worth, Jake Paul is one of the highest-paid YouTubers on the planet, earning up to $20 million a year from the video-sharing site.

Jake Paul already has a massive net worth, so why does he need to box?

It’s simple. It’s because he loves it, and it makes him a fortune.

When the 24-year-old turned professional on Demetrius Andrade’s undercard in Miami, nobody could’ve foreseen how far his fighting career would go.

According to the Daily Mirror, the social media mogul earned around £750,000 for stopping fellow YouTuber AnEsonGib inside of one round – but that figure doesn’t include bonuses that would likely have taken his earnings far higher.

He followed this with an unbelievable viral moment. He fought basketball legend Nate Robinson, on the undercard of Mike Tyson vs Roy Jones Jr. And Paul took full advantage of the millions of people watching the card by explosively stopping the professional athlete.

Paul reportedly earned an initial $600,000 for the contest. But during an interview with ESPN’s Mark Raimondi, ‘The Problem Child’ revealed that he eventually made eight figures – $10 million minimum.

When Paul stepped it up in the ring

Paul’s next bout captured the world’s attention. His opponent, the ex-UFC fighter Ben Askren, more than played his part in the build-up to the contest. He dismantled his younger opponent at the press conference with his quick wit. But he wasn’t able to deliver on fight night.

Paul stopped the former Olympian in less than two minutes. And according to CBS Sports, he made an official purse of $690,000 for his efforts.

However, he likely earned millions when you consider his slice of the pay-per-view sales.

According to Ohio State Commission figures, in his last fight with Woodley, Paul made a career-high purse of $2million. But again, that doesn’t consider the 1.5 million PPV buys the 24-year-old claimed the event did.

The pantomime villain has generated more interest than most boxers could ever dream of in just four fights. But this could be just the beginning. If Jake Paul rubberstamps his rivalry over the former UFC world champion with a KO victory, then his net worth will undoubtedly rise to an even higher level than it already is.