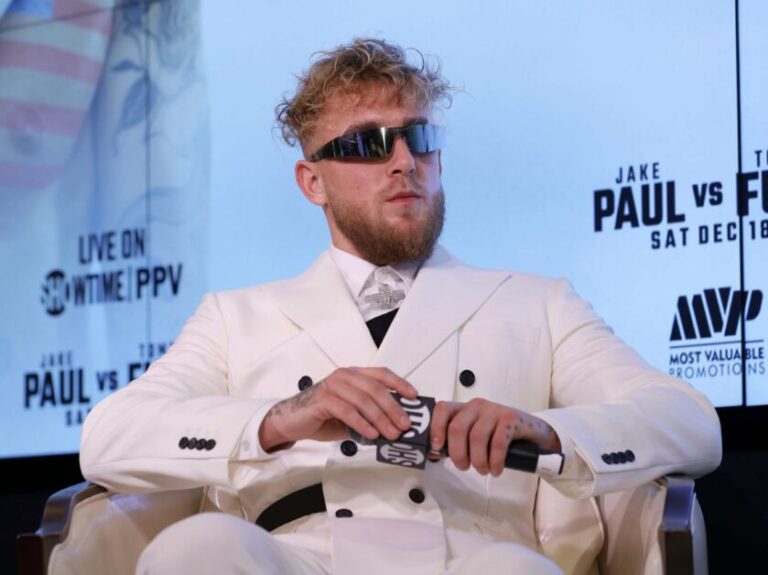 Jake Paul is no longer fighting Tommy Fury on December 18, but that hasn’t stopped him from launching more insults at his rival.

The pair were due to participate in a highly-anticipated bout in Florida on Saturday. Both hold unbeaten professional records, so that fact alone made the fight appealing.

It also turned into an actual grudge match. There was a chaotic press conference, insults exchanged across social media and even the prospect of Fury having to change his name if he lost.

However, the fight is no longer going ahead. The former Love Island star was forced to withdraw due to a severe chest infection and a broken rib.

Read: Tommy Fury training footage sparks theories about why he pulled out of Jake Paul fight.

That left Paul scrambling to find a new opponent. He managed to do exactly that, agreeing on a rematch with his former adversary Tyron Woodley.

But whilst preparations have ramped up for his re-arranged fight, the YouTuber hasn’t forgotten about the opponent he was initially supposed to take on.

Speaking to Boxing Social before the Woodley bout, Paul was at pains to point out that people had criticised him for his status on YouTube compared to Fury’s position as a professional boxer – but that he is the only one ready to fight.

On his opponent’s decision to pull out, he explained: “I wasn’t really surprised. Ever since he pulled out of the press conference and hadn’t really been posting on social media, I felt like he didn’t really want the fight.

“It wasn’t really a surprise. It’s funny, he’s the ‘professional boxer’, and I’m the ‘YouTuber’, but I’m here. Getting the job done. He’s a joke.”

What can we expect from Paul v Woodley II?

The build-up to the first fight between Paul and Woodley had all the chaos you would expect.

After an intense press conference, there was a confrontation that featured members of both camps and even Woodley’s mother.

It didn’t work out that way. The YouTuber secured the victory by split decision in the fight itself. However, his UFC star opponent could have won the contest himself on several occasions but could not deliver the crucial knockout blow.

Four months on, it will be interesting to see whether either camp has prepared differently for this fight. A win for Paul would more than likely set up a future bout with Fury once the 22-year-old recovers from illness and injury. Even if he loses, don’t be surprised if the fight gets arranged anyway, given the existing bad blood.