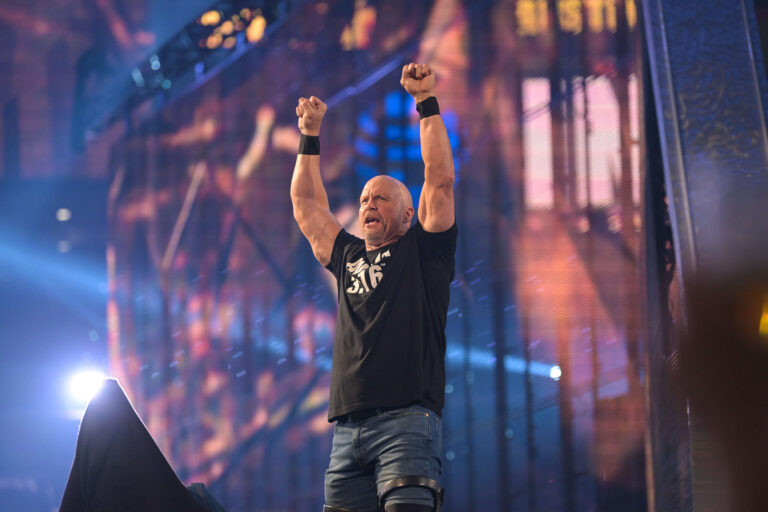 Austin brought the roof off the AT&T Stadium in Dallas, Texas, when he emerged to face off against Owens.

In what was initially billed as a special edition of ‘The KO Show’, Owens instead challenged the ‘Texas Rattlesnake’ to an impromptu match on the grandest stage of all.

After 19 years away from the ring, Austin accepted the challenge.

For the first time since 2003, the WWE Hall of Famer was to compete in a sanctioned match. And he did not disappoint. The 57-year-old showed barely any signs of ring rust in a match that lasted beyond 13 minutes.

After a brief spell of fighting in the crowd and on the stage, the pair ended the fight with a brawl in the ring. Owens landed a Stunner to secure a near-fall before Austin hit his own Stunner – a move he made famous – to win the match.

It capped off an incredible opening night of WrestleMania. And to the delight of fans in attendance over the two-night event, Austin wasn’t done for the weekend. On night two of WrestleMania, he re-emerged, performing Stunners to Austin Theory, Pat McAfee and Vince McMahon.

Read: Pat McAfee admits being Stunned by Stone Cold took him by surprise

Before the event, it was rumoured that Austin would indeed be making an in-ring comeback. WWE kept plans under wraps, making for an even more special spectacle.

Fans questioned whether Austin would be in good enough shape to compete in a match, given his history of neck injuries and his retirement 19 years ago. But Austin put those doubts to bed with an impressive display, given all the above factors and his age.

Wrestlers, though, are notoriously harsh on themselves when adjudging their matches. They expect nothing less than perfection.

Jim Ross is a long-time close friend of Stone Cold, and revealed how the ‘Texas Rattlesnake’ adjudged his WrestleMania blockbuster.

Speaking on his podcast, ‘Grilling JR‘, Ross explained (quotes via Inside The Ropes): “I wasn’t gonna let the WrestleMania event pass by without checking out Stone Cold.

“You know, he and I talked going into that thing, and we communicated on Saturday after the show. He seemed to be real happy and, really, almost relieved that they pulled it off. He and Kevin Owens deserve a hell of a lot of credit for what they did.

“It shows you what kind of ballplayer Austin is. He hadn’t been on the field [for] what was it? 19 years, something like that? He didn’t look like he missed a step, and they kept the match in their lane.

“I thought that was really smart. How they strategised and laid out that match, it was just an absolute masterpiece, in my view.