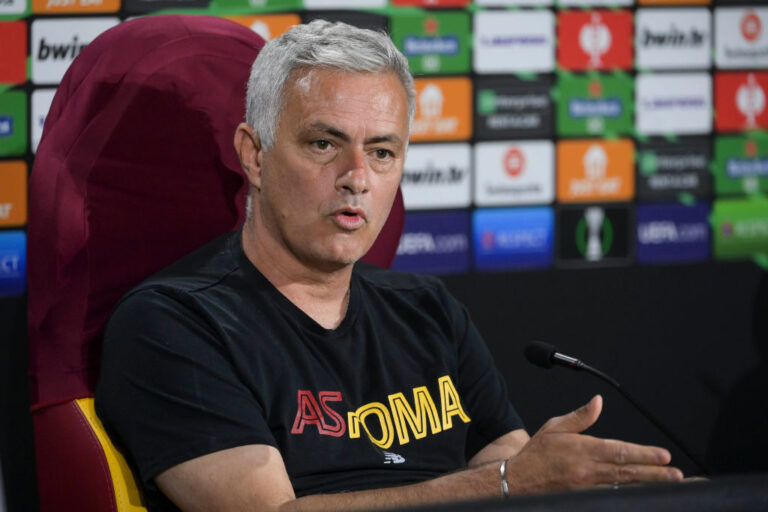 Jose Mourinho has steered Roma to the final of the Europa Conference League. The Italian side will face Feyenoord in the final on Wednesday 25 May.

Mourinho’s side overcame Leicester City in the semi-final to reach the showpiece event. It will be the fifth European final of the Portuguese’s career. In all four previous finals, Mourinho has tasted success.

With Porto, he won the 2003 UEFA Cup and 2004 Champions League. He then lifted the Champions League again with Inter Milan in 2010, and won the Europa League in 2017 with Manchester United.

In the semi-final, Mourinho was visibly emotional when his side overcame the Foxes to confirm their place in the final. Tears streamed down his face as he hugged and celebrated with his players and staff.

Speaking after the match, he said: “Why did I shed a tear? Because I feel what [the fans] all feel. It’s a giant club without a trophy room for the social importance of this club. I know what it means to these people, and my emotion was for them. I’ve been lucky enough to be in more prestigious finals, but this made me feel very special.”

Mourinho and Ancelotti both taste success in Europe

Both Mourinho and current Real Madrid manager Carlo Ancelotti experienced indifferent fortunes during their last stints in England. Although he took Tottenham to the Carabao Cup final, Mourinho was sacked before he could take charge of his side at Wembley. Ancelotti, meanwhile, improved Everton.

Upon his return to Real Madrid, Ancelotti galvanised a struggling squad. They now seem to have returned to their old ways.

Having regained the La Liga title, Los Blancos are going for a double. However, they must overcome a Liverpool side who retain ambitions of a historic quadruple.

Managers such as Jurgen Klopp and Pep Guardiola have received much praise in recent years. Liverpool and Manchester City have dominated English football for the best part of the last decade.

Mourinho and Ancelotti have received far less media attention than in previous years. Despite this, Mourinho doesn’t intend to quit anytime soon.

“When you´ve got the passion and the quality, it´s up to us to say when we´re done. We´re the ones who will decide when to quit. But I think you´ll have to wait a while. Because it won´t be soon.”