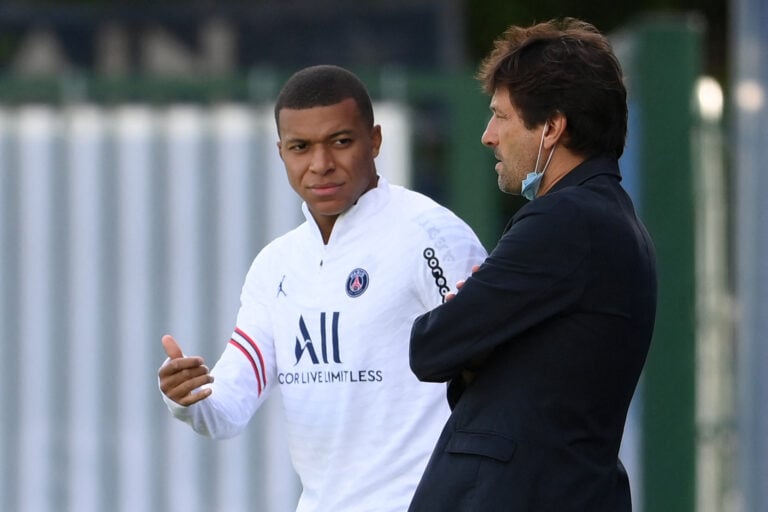 Paris Saint-Germain sporting director Leonardo has hit out at Real Madrid over their long-running pursuit of the signing of Kylian Mbappe.

Real have been long-term admirers of the 22-year-old, and saw a number of bids rejected by PSG for his services in the summer transfer window.

Mbappe has entered the final 12 months of his current deal at the Parc des Princes, meaning that if he does not extend, he could choose to leave the club for free in the summer or agree a pre-contract arrangement with another club in January.

He revealed in an interview with L’Equipe earlier this week that he did tell PSG he wanted to leave this summer so that the club could receive a transfer fee.

Real president Florentino Perez, meanwhile, told Spanish outlet El Debate yesterday on a potential Mbappe deal: “We hope that next year everything will be solved.”

He later clarified his comments, telling RMC that they were “misinterpreted”.

Leonardo is the latest to speak out on the situation – and the PSG sporting director has made his feelings perfectly clear as to his opinion of the behaviour of the Spanish giants.

He told L’Equipe (quotes via French journalist Hadrien Grenier): “It’s been two years that it lasts, I remind you that the transfer window is over.

“There are matches and Real Madrid cannot continue to behave in this way. May it stop!

“Mbappe is a PSG player and the club wants this relationship to last.

“This new outing is just the continuity of a lack of respect towards PSG and towards Kylian Mbappe.”

Despite rumours circulating over his future, Mbappe has made an excellent start to the Ligue 1 season.

In his first six games, the Frenchman scored three goals and two assists, as well as providing two assists in Champions League fixtures against Club Brugge and Manchester City.

PSG are next in action on October 15 when they take on Angers at the Parc des Princes.