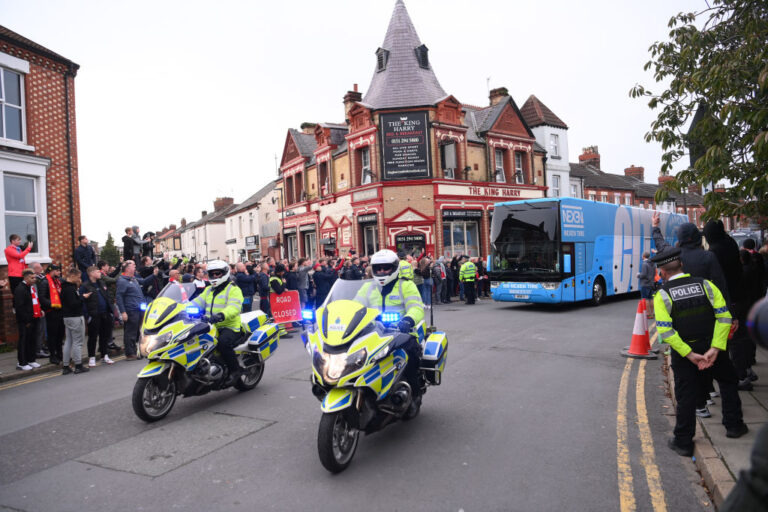 Manchester City is reportedly claiming that their team bus was deliberately targeted as they left Liverpool’s stadium on Sunday evening.

The incident marks yet another sour note from a fractious encounter between Pep Guardiola’s side and Jurgen Klopp’s Liverpool.

The reigning Premier League champions claim that their bus was targeted as they left Liverpool’s stadium, well after the final whistle.

According to the Daily Mail, players and staff on the coach heard a crack as something hit the windscreen. This apparently occurred whilst the vehicle travelled down Anfield Road.

A picture is also circulating showing the damage done to the bus windscreen. A circular impact point has left a significant crack in the glass, although its exact size is unknown.

Fortunately, this seems like the only reported damage. No Manchester City players were harmed either.

However, this is not the first time that City’s bus has suffered from an attack whilst on Merseyside.

In April 2018, before the Champions League quarter-final tie between Liverpool and Manchester City, the visiting team bus came under fire.

Liverpool fans had lined the streets along the coach’s route to intimidate the away team. They threw bottles, cans, and flares, ultimately rendering the bus unfit to drive.

Whether the intimidation worked or not, Liverpool did win the home leg 3-0. This does not condone the unacceptable actions, though.

As a result of the attack, UEFA fined Liverpool £17,500 for the supporters’ behaviour. The FA and Premier League have not yet commented on this latest.

This incident came after Man City suffered their first defeat of the season at Anfield. Coincidentally, it also saw The Reds earning a much-needed victory.

Interestingly, Mo Salah grabbed the only goal of the controversial game.

VAR intervened to rule out a Phil Foden strike for the visitors, prompting furious reactions from Guardiola and City players.

Additionally, the fast-paced and physical game saw both sides feeling aggrieved at the non-awarding of free kicks.

Klopp gets sent off

Late on in the match, referee Anthony Taylor sent off Klopp. This was after his angry response to the referee missing another alleged foul on Mo Salah.

This incident also flared up tempers among players, with Bernardo Silva getting into a pushing match with his opponents.

However, the worst of events occurred in the stands. As Guardiola gesticulated over the key VAR decision, Liverpool fans reportedly threw coins at the visiting manager.

Following this, Klopp apologised to the Man City manager, claiming that he did not see fans throwing coins.

Elsewhere, Liverpool condemned alleged chants from the away end that referenced previous stadium tragedies, as well as graffiti about the incidents, too.

Merseyside Police released a statement to confirm that they will investigate these issues from Sunday’s match.

Now, further negative actions have come to light in the aftermath of the game.