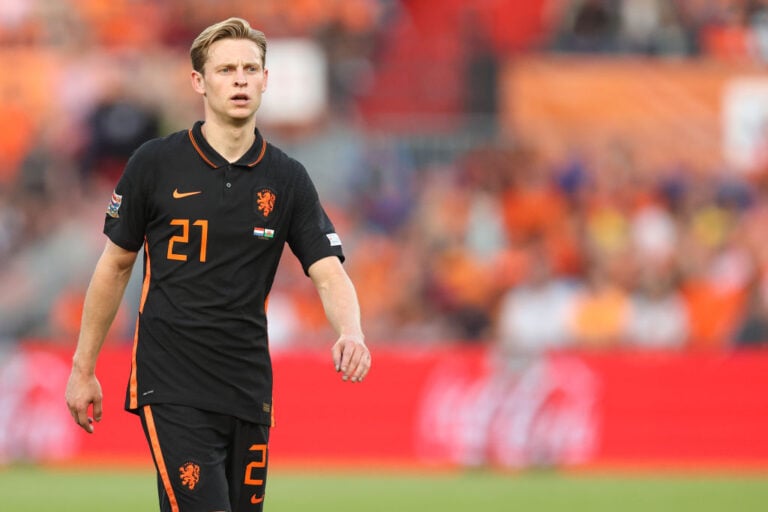 Manchester United and Barcelona are close to reaching a ‘compromise’ deal for Frenkie de Jong, according to Goal. The Premier League side identified De Jong as a prime target at the end of last season. They are yet to make a summer signing in this transfer window.

New boss Erik ten Hag wants to bring in several recruits who fit his style of play, and De Jong is a prime candidate. The pair worked wonders together during their time at Ajax. De Jong was a key performer in the club’s domestic and continental success during that period. His rise at Ajax prompted Barcelona to spend an initial €75 million on him in 2019.

While he has been far from a flop in Spain, De Jong has not dominated the Barca midfield in a way that many anticipated. The highly-publicised financial problems that Barcelona have endured in recent years, coupled with the ascension of several talented La Masia graduates, have led to the club viewing De Jong as expendable.

De Jong is only 25 years old, with his best years likely ahead of him. He’s an attractive signing for top clubs around the world, including United. Barcelona know this and have a high price in mind before they’re willing to sell. They may waver on this, though.

Most transfer fees are the middle ground between what a buying club is willing to spend and what a selling club hopes to receive. That appears to be the case in the De Jong saga.

Barcelona and United are close to agreeing on a compromise fee of £69 million (€80m), with the likelihood of add-ons. Although these add-ons are unspecified, they will likely involve achievements like Champions League qualification and Ballon d’Or recognition.

United have previously had a bid of £51m rejected by Barcelona.

Does De Jong want the transfer?

Although De Jong has a good relationship with Ten Hag, the player is understood to prefer to stay in Barcelona. He has made this clear multiple times, even calling Barca the ‘biggest club in the world’ on media duties during the international break. However, De Jong has probably accepted the inevitable, with Barcelona determined to sell.

Although he will get a high wage at United, the English club will not play Champions League football next season. The inability to offer this luxury makes it challenging to attract top-class players. And while Ten Hag is a manager that De Jong trusts, the midfielder would have every right to be suspicious about how the club is run. Reports are rife that Cristiano Ronaldo is unhappy about the lack of promised signings.