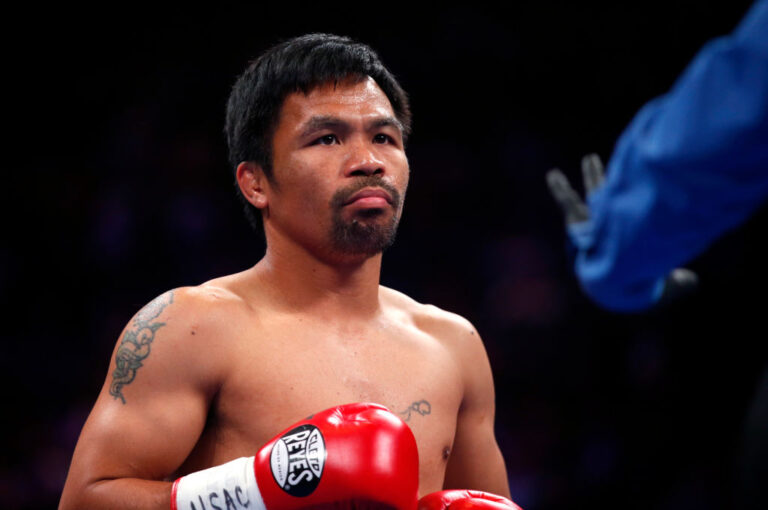 Following a short-lived retirement, the legendary Manny Pacquiao will return to the ring on December 10 in South Korea.

The Filipino last set foot through the ropes, in a losing effort against Yordenis Ugas in August last year. Despite producing a valiant attempt, he fell foul to the Cuban’s southpaw left hand and laserlike jab. Ultimately, in the knowledge that his best days had passed him by, the eight-weight world champion decided to hang up the gloves.

However, with the popularity of exhibition bouts shooting through the roof, the 43-year-old has decided to treat the fans to one last dance. The legend looked set for a bout against Conor McGregor. But the contest failed to materialise. He then switched his attention to his old rival, Floyd Mayweather.

However, he’s didn’t land this contest either. So with his heart set on a comeback fight, the boxing icon signed a deal with Triller to take on a ‘modern-day Bruce Lee’.

Read: Tyson Fury vs Dereck Chisora 3: The fight no one wants is almost here (sporf.com)

The pound-for-pound great will collide with South Korean superstar, DK Yoo. The martial arts instructor has risen to fame in recent years for his interesting techniques. To the naked eye, he appears to possess a high level of skill. His movement looks fluid and his technique appears sharps.

Rumours suggest he was in the Special Forces, while others say he underwent extensive training by Russian Spetsnaz. However, we don’t have any concrete proof to confirm these claims. Regardless, he’s built an empire selling his online workshops. But on December 10, we’ll discover if he can really compete at a high level when he collides with one of the greatest strikers of all time.

Yoo will definitely have the crowd on his side, but when he sets foot in the squared circle with Pacquiao, he’ll have to rely on much more than cheers from the audience.

Is he up for the task? We’ll have to wait until fight night to find out.