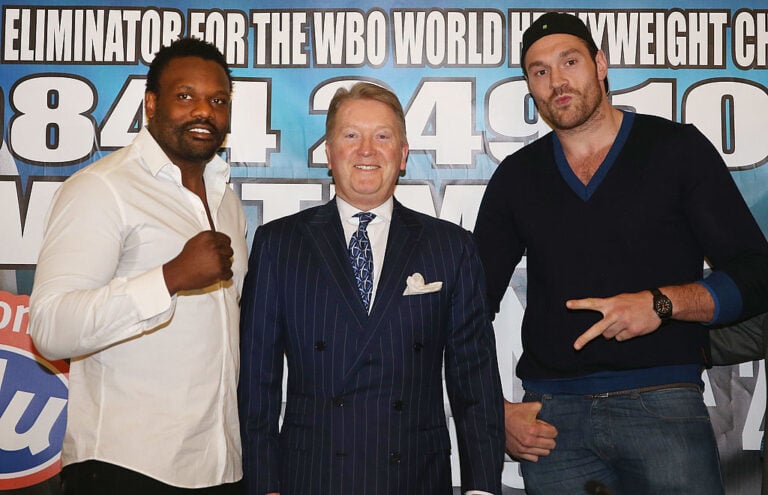 In typical boxing fashion, we’ve lost the biggest fight in British history, and instead, we’re being force-fed another collision between Tyson Fury and Derek Chisora.

Throughout the entirety of September, fans genuinely believed that a bout between ‘The Gypsy King’ and Anthony Joshua would finally come to fruition. But as is often the case, the sport we love, kicked them in the teeth. Sadly, the pair have gone separate ways and now look set for equally underwhelming bouts.

But while AJ at least looks like he’s heading in the direction of a new opponent, for some reason, the WBC Champion looks set to go over old ground. In an interview with IFL TV, Fury’s promoter, Frank Warren, claimed that his man will go toe-to-toe with ‘Del Boy’ for a third time.

The 70-year-old said: “We’ve been struggling to get an opponent, but we’ve got the highest-ranked opponent, which is Dereck Chisora.

“That’s where we’ll be going and that’ll be on December 3. We were just trying to find someone, and it’s been very difficult. What it’s all about is that Tyson will have had one fight in a year and we always expected the fight in December would have been Usyk, but Usyk wasn’t available.

“Now, I hope, that looks like some time in February. Tyson wants to fight before then and get out, we want to get him out, and that’s where we’re at. I’m not going to disregard Chisora, but if he comes through that, then we’ve got the big one [vs Usyk]. That’s really what it’s all been about this year.”

Should Tyson Fury vs Derek Chisora 3 go ahead?

Although Chisora’s heart isn’t in question, his skills most certainly are. Make no mistake, the popular contender is in and among the top twenty heavyweights on the planet. But he most certainly doesn’t have the talent to compete with Fury.

The pair have gone to battle twice, with the 6 ft 9 giant winning both contests with ease. In fact, the second bout was so one-sided that Chisora’s corner had to pull him out. Therefore, a third match-up between the pair makes absolutely no sense, especially considering the fact the ageing gatekeeper got dropped three times by Joseph Parker just two fights ago.

Of all the rumoured opponents for Fury, this would be the worse. At least Manuel Charr would’ve made for something fresh. All fans can do now is hope that Warren has thrown a red herring into the mix. But by the sounds of it, this mismatch is extremely close to being finalised.