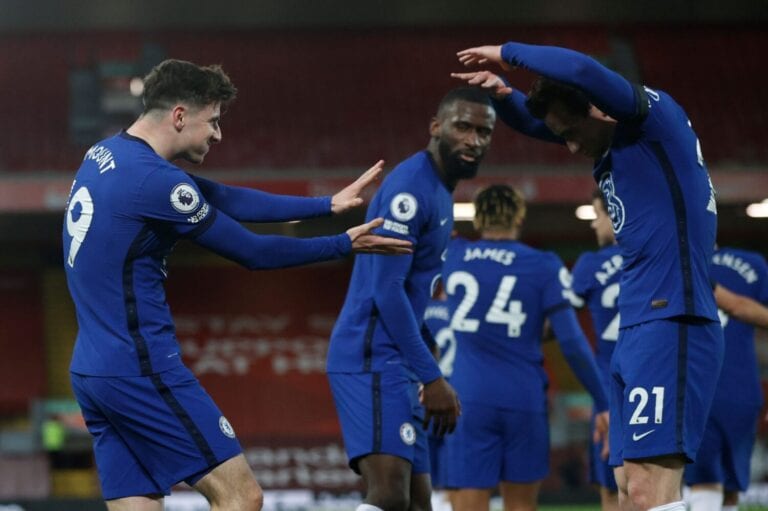 The Blues produced a clinical display at Anfield to condemn the Reds to their fifth consecutive home defeat. Tuchel’s men dominated the game throughout, and perhaps should have added to their lead on the evening.

The winning strike came via Mason Mount, who cut inside and placed the ball into the corner of Alisson’s net in confident fashion.

It comes after a phenomenal surge through the ranks at Stamford Bridge, along with an impressive loan spell at Derby, for the young Englishman who was introduced into the Chelsea first team under Frank Lampard.

The rise of Mount

Mount’s celebrations continued after the full-time whistle, where him and Ben Chilwell teamed up to produce an anime-inspired performance.

Mount expanded a little on the inspiration behind the bizarre celebration to Sky Sports after the game.

“We take a lot of flights to away games and me and Chilly (Ben Chilwell) sit behind Kurt Zouma on the plane,” Mount said.

?️ "I'm not the quickest.. but I have got a little burst of pace"

“He’s always watching anime cartoons and we always just watch it from behind him.

“So that was the celebration. I said to Chilly if I score or if he scores, we do it. “Obviously I scored today and we’ve done it and it was for Zouma as well.”

Aside from making us want to watch Dragon Ball Z, there was something really enjoyable about Mount’s interview.

He was down to earth, answered questions with ease and generally seemed quite comfortable in front of the camera. It’s not the first time that the midfielder has been a hit with viewers in his post-game chats either.