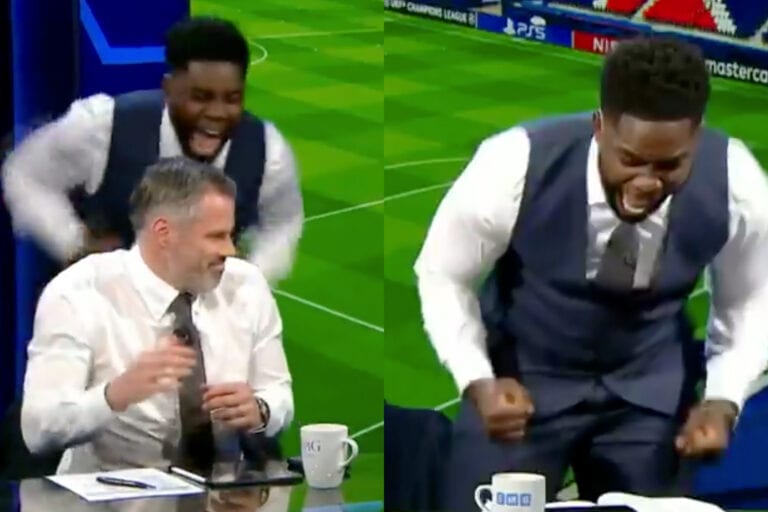 Manchester City produced a superb second half performance to come back from a goal down and defeat Paris Saint-Germain 2-1 in the Parc des Princes last night.

Kevin de Bruyne and Riyad Mahrez both scored within seven minutes of each other to help City to victory.

The result means that a draw in the second leg of their Champions League semi-final tie would be enough for City to progress to their first ever final of the competition.

PSG captain Marquinhos put the French champions in front in the first half with a bullet header.

Mauricio Pochettino‘s side had the better of the opening exchanges, with Phil Foden’s close range effort the only clear cut opening for City in the first half.

But Pep Guardiola’s team were excellent in the second half, and equalised through de Bruyne.

City fans around the world will have been out of their seats when the goal went in, and perhaps none more so than Micah Richards.

Richards was doing punditry for CBS Sports on the night, alongside Jamie Carragher.

As soon as de Bruyne’s goal went in, the former City defender jumped out of his chair and raced across the studio in celebration.

Mahrez would later score a free-kick to give City the lead, although the reactions were rather calmer on that occasion.

Richards has provided us with plenty of memorable moments in the studio this season, whether that be with Carragher or ex-Manchester United captain Roy Keane.

He showed Keane a viral TikTok video of celebrations performed by the Irishman’s in-game character on FIFA 21 – and it got exactly the reaction you’d expect.

And there was the hilarious dance routine that Richards and Carragher performed in the CBS Sports studio during the quarter-final stages.

If City do succeed in getting through to the final next week, we’ll no doubt see more brilliant celebrations.