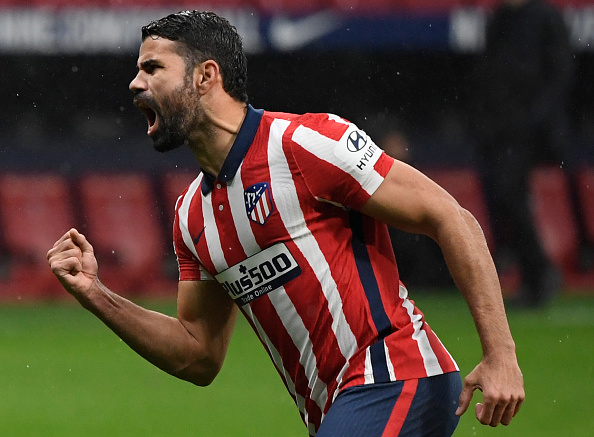 News broke yesterday that Diego Costa has asked to Atletico Madrid to terminate his contract due to personal reasons.

The 32-year-old striker has had a difficult spell at the club since his return to the Spanish capital. Costa has only managed 17 goals in 105 appearances since his second spell at Atletico.

Game time has been limited for Costa since the arrival of Luis Suarez from Barcelona. The former Spain international has only played 7 times this season, managing only two starts.

Atletico are willing to let Costa leave if they can find a suitable replacement. Adriuszk Milik has been linked with a move to Diego Simeone side.

With the a move for the striker looking imminent, where could Costa go next?

A few La Liga clubs will have their eye on the situation as they could pick up the tenacious Costa from the leagues table toppers for free.

However, three teams in the division will be ruled out as Diego Costa has an interesting clause in his current contract. The clause would force Costa to pay to Atletico £23m if he were to join Barcelona, Real Madrid, or Sevilla.

The striker had enjoyed loan spells at at a number of La Liga clubs in the past. In 2007 he went on loan to Celta Vigo and scored six goals. He also impressed when on loan to Real Valladolid getting nine goals and six assists in 2009. His best loan spell was at Rayo Vallecano (now in tier two) when he had 14 goal contributions in 16 games.

Out of these previous clubs Celta Vigo seem the most likely out of these three to suit Costa as they often challenge for European spots.

Since the news emerge there has been a lot of rumours circulating about a possible move to Arsenal. The rumours have led to mixed reactions from Arsenal fans.

Some fans believe that bringing the 32-year-old to the club would not be a wise move.

Others think that the fighter mentality that Costa holds could be very useful for Arsenal in their current situation.

Costa was not a popular man at the Emirates in his Chelsea days. He was always a menace for the Arsenal defenders battling at every given opportunity.

But his popularity could all change if they bring him in and he helps to push them back up the table.

Another Premier League team loosely linked to Costa is Wolverhampton Wanderers. Since the tragic injury to the club’s main man, Raul Jimenez, Wolves have been forced to use inexperienced youngster Fabio to lead the line.

Although Silva looks to be a talent, this season was supposed to be about learning from Jimenez and picking up experience. Instead, the young striker has had to learn on the job without a mentor.

With Jimenez out for the foreseeable future due to his injury could Diego Costa be the perfect short-term replacement for Wolves?

Bringing in Costa would guarantee an experienced out and out striker and with the creativity of Pedro Neto, Daniel Podence and Adama Traore, there would be plenty of supply for Costa to feed off.

Another option could be a move to China. Since the massive financial investment into the Chinese Super League some of Europe’s top stars have made big money moves to the CSL.

Many Spanish and Brazilian players have decided to move to China with wages playing a massive factor. Players such as Oscar, Hulk, Paulinho, Marko Arnautovic and Marouane Fellaini have all ditched big clubs for China in recent years.

Could Costa be the next big name to join the crop of imported talent in the CSL.

Return to Brazil for Costa?

Another move usually made by players of Brazilian heritage at an older age is to return to Brazil for their final years. Despite taking Spanish citizenship in order to play for Spain, Costa was actually born in Brazil.

Players usually move back to their original club or the towns and cities of their birth. Costa did not stay in Brazil for long at the start of his career as he moved from lower league side Barcelona Esporte Clube to Braga at the age of 18.

This means that most of the Liga do Brazil clubs will feel they could bring Costa in.

Where do you think Costa should end up? Let us know @sporf on Twitter.