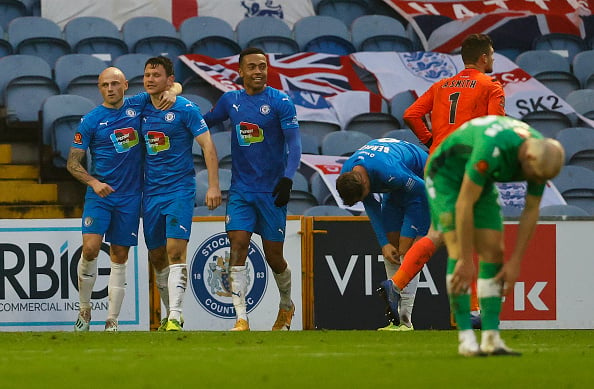 Non-League Stockport County face off against Premier League side West Ham United as they aim to continue their impressive FA Cup run.

With replays scrapped for this years competition there has to be a winner on the night.

Stockport have had a good start to the season, they currently sit in 4th place in the Vanarama National League.

The Hatters are one of only two non-league teams left in the competition with Chorley already through to the next stage.

The FA Cup clash is a true giant vs minnow game. West Ham sit 86 positions higher than Stockport in the English Football pyramid.

West Ham are currently in 10th position in the Premier League but only sit three points off a top four spot in what has been a crazy season.

Despite the playing at different levels the two teams have met on a few occasions over the years. The last time the teams met Stockport came out on top.

Stockport, who were playing in tier 3 at the time, picked up a shock win against West Ham in 1996.

The side from Greater Manchester knocked West Ham out of the League Cup the last time they visited Edgeley Park.

In an interview with the Daily Express, Harry Redknapp, former West Ham boss, said: “it was a nightmare night”

Redknapp added: “Stockport County had a decent team then. They were very difficult to play against”

This previous result should help gee up the Stockport players for a big performance against the Premier League side.

County manager Jim Cannon has asked his players to ‘enjoy the occasion’ as they have the opportunity to play against a top side.

News that a few West Ham players may be missing due to implications created by the Coronavirus should give even more hope to Stockport in getting a result.

Stockport’s main goal threat will come from John Rooney. The younger brother of Wayne Rooney has been in impressive form this season. He has scored seven goals so far in the National League.

Stockport are currently the 12-1 underdog for the match, but the magic of the FA cup means anything can happen.

Do you think Stockport can shock West Ham? Let us know @SPORF on Twitter.