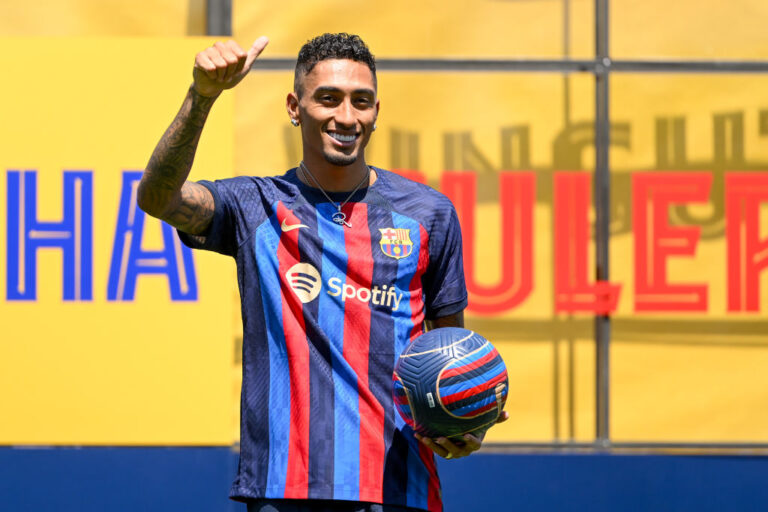 Scoring goals and firing shots —Raphinha got off to the perfect start for Barcelona after scoring a terrific goal and launching insults at Real Madrid afterwards.

On July 15, the La Liga giants finally completed the signing of the Brazilian. As per The Athletic, the Spanish club whipped out £55 million to secure the winger on a five-year contract.

In the last campaign, Raphinha impressed Xavi by scoring 17 goals and bagging 12 assists in 65 appearances. And his intuition has proved correct, as the 25-year-old has already gotten off to a cracking start with his new side.

Raphinha scores on his Barcelona debut

On July 20, the La Liga giants commenced their pre-season tour of the USA with a 6-0 victory over Inter Miami. But while Memphis Depay caught the headlines due to his remarkable finish, the Man of the Match award had to go in Raphinha’s direction.

Inside the first half alone, the new signing bagged two assists. And to add the icing on the cake, he hialso t the back of the net aIn the 25th minute, he found himself on the end of a cross and hit the ball as sweet as you like. Despite the goalkeeper getting a hand to the shot, he couldn’t deter it from crossing the line.

His stunning debut ultimately left Inter Miami owner David Beckham furious and Barca supporters in raptures. But despite making an immediate impact, he’s already focused his ambitions on a much bigger target.

As per ESPN’s Jorge Ramous, he said: “I am very happy with my first goal for Barça. Of course, I would also like to score against Madrid. I think we are better than them.”

Last season, Barca’s rivals romped home with 13 points to spare. However, this time around, the five-time European Cup winners will have Xavi in their corner for the entire campaign.