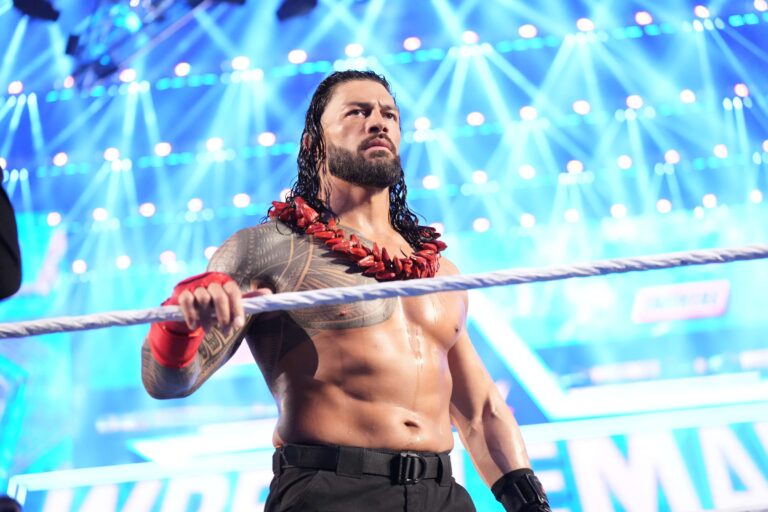 In a match that lasted just over 12 minutes, the two WWE giants traded blow for blow in an attempt to close off WrestleMania 38 in the best way.

Things stepped up a notch when Reigns speared Lesnar through the outside barricade. Reigns hit several Superman Punches. Lesnar then performed an F5 for a near fall.

The Universal Champion landed another spear. In the process, he took out the referee. Afterwards, he smashed Lesnar over the head with the title belt. The ‘Beast Incarnate’ kicked out.

Reigns then fell into the trap of the ‘Kimura Lock’, writhing in agony before reaching the ropes, with help from Paul Heyman. The ‘Tribal Chief’ then got to his feet and performed a final Spear on Lesnar to end the match.

However, regardless of whether he won or lost, Roman Reigns had already surpassed his cousin, Dwayne ‘The Rock’ Johnson, in one incredible WWE statistic.

In taking part in his sixth main event at WrestleMania, as per Twitter account @WWEStats, Roman Reigns overtook The Rock’s five main events. He is now two off the record held by Hulk Hogan.

The American’s first main event was back at WrestleMania 31. On that occasion, he also took on Lesnar. However, before the match could conclude, Seth Rollins cashed in his Money in the Bank briefcase and pinned Lesnar.

He headlined three consecutive main events at WrestleMania 32, 33 and 34, defeating Triple H and The Undertaker, before losing to Lesnar.

Reigns then defeated Edge and Daniel Bryan in a Triple Threat match at last year’s event. In doing so, he retained the Universal Championship.

The Rock had five main events across his two spells in WWE. He headlined WrestleMania 28 and 29, facing John Cena on both occasions. The ‘Brahma Bull’ lost a Fatal-4-Way match at WrestleMania 2000 before being defeated by ‘Stone Cold’ Steve Austin at WrestleMania 17.

He also headlined the event two years earlier against Austin in a losing effort.