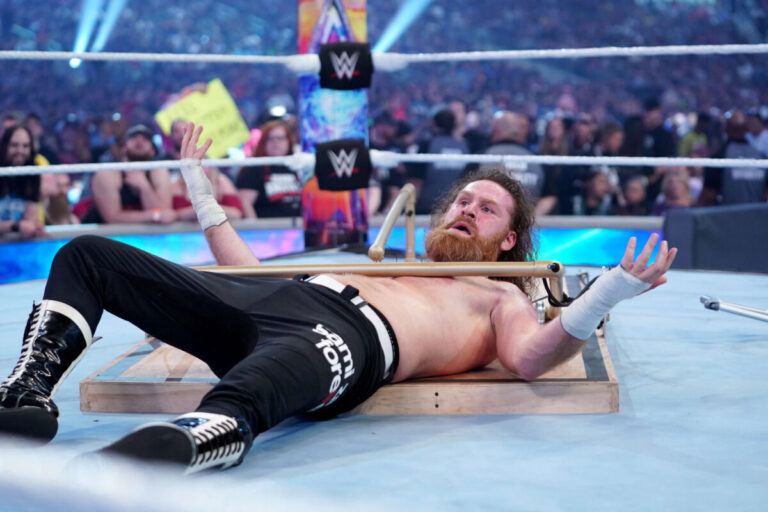 Sami Zayn has given his reaction to a hilarious viral video featuring commentators Michael Cole and Pat McAfee at WrestleMania 38.

The fan footage was taken during Zayn’s ‘Anything Goes’ match against Johnny Knoxville at the ‘Show of Shows’.

Billed as the second match on the card of night two, Knoxville and Zayn put on a highly entertaining matchup. It was never going to be a five-star, pure wrestling contest, but the pairing absolutely made the most of the 14 minutes they were given to perform.

The fans loved it. And so did Zayn, who, despite losing the match, ranked it one of his best WrestleMania moments.

He tweeted: “My WrestleMania match against Johnny Knoxville is one of my all-time favourites. Definitely one of the matches I’m most proud of.

“I’ve had a lot of great matches in my career, I’d put this up with any of them. Anyone who saw this match will remember it. That’s as good as it gets.”

The Jackass star and Zayn fought inside and outside of the ring, utilising various contraptions to their advantage.

But the match’s highlight came when Knoxville’s co-star and friend, Wee Man, appeared from underneath the ring. Wearing a WrestleMania T-shirt, Wee Man landed several blows on Zayn before performing an incredible body slam in the ring.

The fans went wild, and the moment was made even better when Knoxville landed a Tornado DDT from the top rope.

Wee Man received one of the biggest pops of the night when he made an appearance – and one fan made sure to capture the reaction and post it on social media.

Cole is known for his ability to hype major WWE events, but this was another level. McAfee, meanwhile, has brought a considerable amount of charisma and excitement to the commentary booth ever since joining WWE.

The pair loved every second. However, we’re not sure if it matches Cole’s reaction as he watched McAfee pin Austin Theory later in the night.

Read: Pat McAfee admits being Stunned by Stone Cold took him by surprise

Zayn reserved some significant words of praise for Cole on Twitter.

He wrote: “I love this video. One of the biggest compliments I got about the WrestleMania match with Johnny Knoxville was Michael Cole, who’s seen and called it all for 25 years, saying it was the most fun he’s had calling a match.

“He and Pat added so much. What a party.”