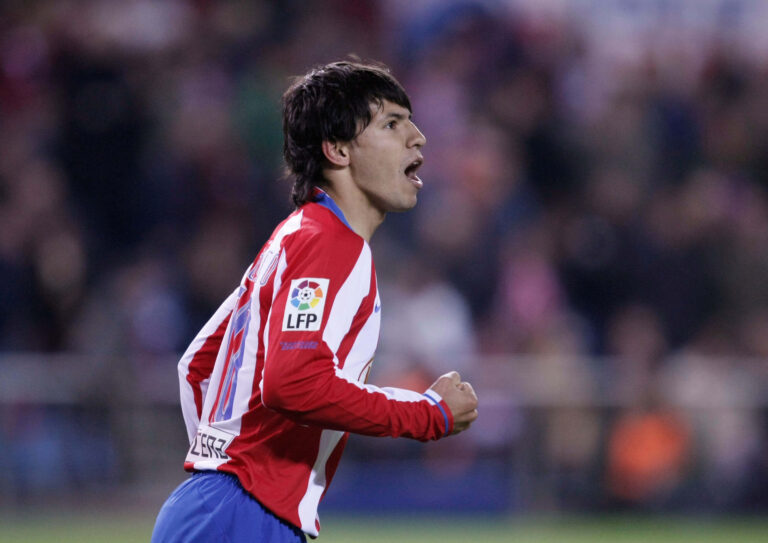 SPORF is continuing its look at the historical winners of football’s Golden Boy award.

There have been 17 winners of the award in total since it was inaugurated in 2003.

On Monday, we took a look at the first winners of the award – Rafael van der Vaart, Wayne Rooney, Lionel Messi and Cesc Fabregas.

Sergio Aguero was destined for big things even before he was presented with the 2007 Golden Boy award. He signed for Atletico Madrid in 2006 and, following the departure of Fernando Torres to Liverpool, became arguably the team’s best player from the summer of 2007 onwards.

He hit 19 goals in LaLiga in 2007/08, before netting a further 17 in the following campaign. Aguero played 119 minutes in Atletico’s Europa League final victory over Fulham in 2010.

In 2011, he made the move to Manchester City and capped off a successful 23-goal first season by netting perhaps the most famous goal in the club’s history against QPR to win the Premier League.

From there, the goals – and trophies – kept on coming. By the time he departed City in the summer of 2021, Aguero had won five Premier League titles, six League Cups, an FA Cup and become the club’s all-time record goalscorer.

He played under three managers and smashed past the 15-goal mark in the Premier League on eight occasions. There’s even a statue of him commissioned for outside the Etihad Stadium. That’s some legacy.

The second player to pick up the Golden Boy award whilst playing for Manchester United, Brazilian midfielder Anderson was recognised after a season in which he won the Champions League for the first time in his career.

Anderson made 38 appearances in all competitions in his debut season for United after making the move from Porto. He arrived in England under high expectations – the Brazilian was one of a number of big-money arrivals that summer as United looked to retain their Premier League title.

They did just that, securing their 17th English top flight title. Anderson played 24 times in the league, and made nine appearances in Europe as United defeated Chelsea to win the Champions League.

He would feature less prominently in the following two seasons. In the latter, he suffered a cruciate ligament injury which forced him to miss six months of action. On his return, he signed a new contract with United and netted three goals in the 2010/11 Champions League as United went on to reach the final.

After the retirement of Sir Alex Ferguson in 2013, Anderson’s game time at United dwindled down significantly. He spent time on loan at Fiorentina, before spells at Internacional and Coritiba in his native Brazil. The midfielder retired in 2019 after a short spell with Turkish side Adana Demirspor.

Pace. Power. Skill. Goals. Alexandre Pato had almost everything at the time of his European breakthrough at AC Milan.

He joined the Italian giants from Brazilian side Internacional in 2007, striking nine goals in his opening 18 games. Then, in 2008/09, he scored 15 goals in 36 Serie A appearances. That was followed by 12 goals in 23 games the following campaign – and the 2009 Golden Boy award – but injuries would soon begin to occur with regularity.

Pato suffered a number of hamstring injuries that would rule him out of much of 2010, but he returned to net 14 Serie A goals in 2010/11. The following season, he was able to make just 18 appearances in all competitions.

After spells with Corinthians and Sao Paulo back in Brazil, Pato got his opportunity in the Premier League when Chelsea signed him on loan in 2016. The loan spell, however, did not have the desired effect – the striker made just two appearances, scoring his solitary goal from the penalty spot against Aston Villa.

He then spent a season with Villarreal, scoring six goals in 24 appearances, before a spell with Chinese Super League side Tianjin Quanjian. The Brazilian currently plays for Orlando City in the MLS, where he has recently returned from another injury absence. What could have been without the injuries?

Five of the best EFL signings of the window so far