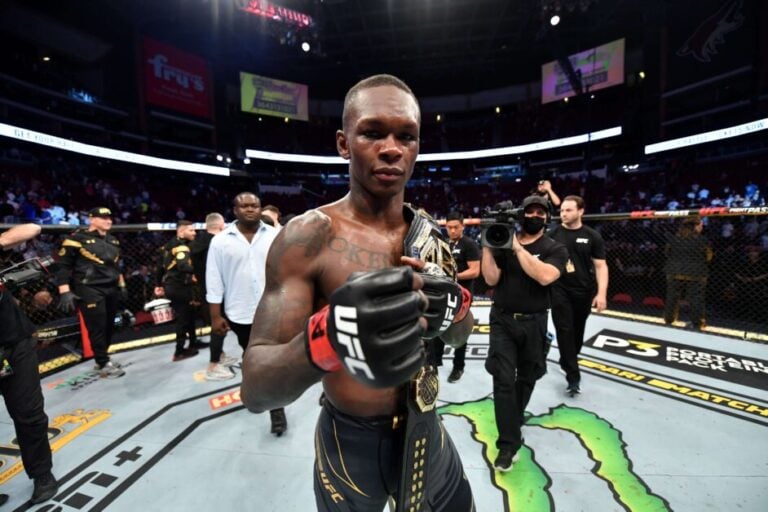 Israel Adesanya has unleashed a verbal onslaught upon Robert Whittaker ahead of their rematch at UFC 271.

On February 12, the pair of elite middleweights collide again at the Toyota Centre in Houston, Texas.

In their first encounter at UFC 243, Whittaker played right into the hands of the ‘Style Bender’. His wild strikes left him vulnerable to the former kickboxing world champion’s elite-level striking. Adesanya timed the Australian with a perfect left hook that sent him crashing towards the canvas. Within just two rounds, the Nigeria-born star had won the title.

However, in the aftermath of the fight, Whittaker admitted his desire to train was at an all-time low. He decided to take a break from the sport, vowing to come back stronger than ever—and he did just that.

Since his return to action, ‘Bobby Knuckles’ has captivated fans with his spell-bounding performances. He beat Darren Till before producing a masterclass against Kelvin Gastelum. This has left his supporters convinced that he can beat Adesanya in a rematch. But the current king of the middleweights isn’t convinced.

Israel Adesanya warns his opponent ahead of UFC 271

Although Adesanya has superior striking, Whittaker has better grappling. The Aussie qualified to represent his country in wrestling at the 2018 Commonwealth Games. This left MMA enthusiasts puzzled about why he didn’t utilise this facet of his game in the first fight.

But after Adesanya’s weakness in this area was exposed by Jan Blachowicz, the Australian public hopes he can implement his pedigree this time around. The champion, however, has had plenty to say about his opponent ahead of the fight.

In an interview with Combat TV, he claimed that Whittaker will “be in shock” when the pair engage in combat.

He said: “Rob’s going to be in shock. He will be in for a rude awakening when he feels me because we didn’t clinch the first time. I hope to clinch with him this time because every time they do it and realise, ‘Oh, he’s a lot stronger than I expected, they all say that. They think they know how strong I am until they feel me, then they’re like, ‘Oh s***.’

If the rivalry was big before, it’s massive now. At UFC 271, Israel Adesanya and Robert Whittaker will participate in a major showdown.

Can the Aussie reclaim the throne, or is the champion on another level? We don’t have to wait very long to find out.