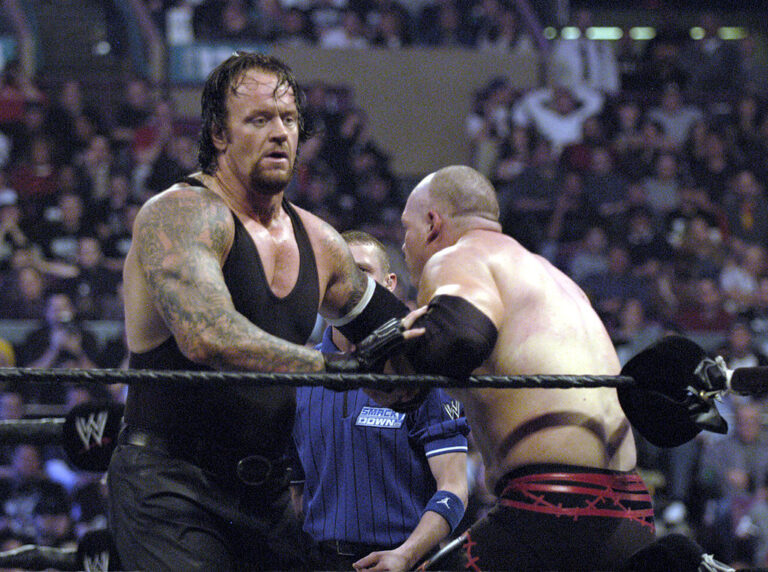 For years, The Undertaker captivated WWE fans with his terrifying aura. But we all assumed that his on-screen persona was an act. However, it turns out there is one unusual similarity in real-life.

‘The Dead Man’ is undeniably one of the greatest wrestlers. For decades his spellbinding performances stunned sporting enthusiasts around the globe. Without his fearsome presence, the WWE wouldn’t be anywhere near where it’s at today. He revolutionised the game and pioneered some of the most beloved matches in the promotion.

In 1998, he helped create a lasting legacy for the ‘Hell in a Cell’ match. ‘The Phenom’ collided with Mankind to produce one of the most shocking moments in wrestling history.

After a brief back-and-forth spell on the cell roof, Undertaker suddenly rose to his feet, a vengeance burning deep in his eyes. He grabbed his rival and launched him off the cage, sending him spiralling five metres until he smashed through a table.

But this isn’t the only match he popularised. It’s impossible to develop a contest better suited for The Deadman than a casket match. Out of the 19 casket matches that have taken place in WWE history, 16 have involved The Undertaker.

Perhaps the most notable casket match involving The Phenom occurred at the Royal Rumble in 1998. The Death Valley native took on Shawn Michaels in another one of the pair’s epic encounters. The Undertaker dominated the match. But before he could close the lid, he was attacked by Road Dogg and Billy Gunn.

Read: Look how ‘The Undetaker’s’ look changed in WWE games throughout the years

Then, suddenly, the crowd erupted as Kane’s music blasted into the arena. He battered the assailants before shockingly turning on his on-screen brother. Kane performed a Chokeslam to throw Undertaker into the casket before smashing it to pieces with a sledgehammer.

He poured petrol all over the coffin before setting it alight in one of the most brutal sporting entertainment moments of all time. As usual, Undertaker defied the laws of science to survive. He’s got a particular knack for that.

The Undertaker used to sleep in the caskets at WWE events

WWE fans often spend time wondering what happens backstage, away from the confines of the WWE ring.

It turns out that The Undertaker had a rather unusual habit that he made use of on more than one occasion. During an interview with Ryan Satin of the Out of Character Podcast, he made an admission that will surprise fans.

Undertaker said: “On more than one occasion, I may or may not have pulled out a casket and taken a nap in there and didn’t think anything about it.

Wrestling fans get a particular joy, on most occasions, from seeing their favourite Superstars portray the traits that make them so popular on-screen. Sometimes, it doesn’t always turn out that way. But, in a slightly strange fashion, Mark Calaway has given an example of precisely that. And that is perhaps fitting, given his WWE character and legacy.