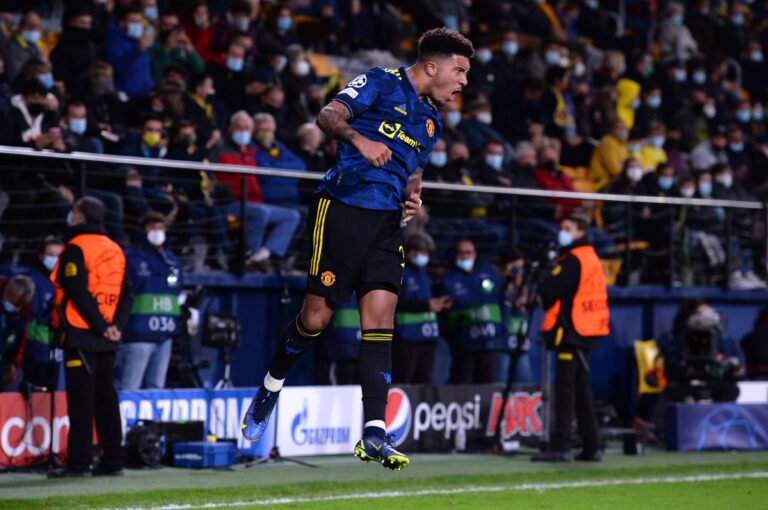 Jadon Sancho scored the first goal of his Manchester United career tonight in a pivotal 2-0 win over Villarreal in the Champions League.

The England international has struggled so far this season. But his performance this evening could be the sign of better things to come.

After the sacking of Ole Gunnar Solskjaer earlier this week, it was of paramount importance that United put in a big performance, and they certainly did that.

Michael Carrick’s first match as caretaker manager couldn’t have gone much better. The Red Devils defeated their fiercest Group F rivals to qualify for the last 16 of Europe’s premier competition.

Sancho may not have been able to hit top form under Solskjaer, but tonight’s stats show just how significant a role he played in this evening’s performance.

The stats that underline a strong night for Jadon Sancho

As per WhoScored, the English international was on fire throughout the fixture. Both of his shots were on target, and one flew into the top corner like a thunderbolt.

Sancho’s passing was also on point this evening as the 21-year-old generated a 92.5% success rate. No United starter had a higher pass completion rate.

In addition, his ever-present work rate was on full display as the winger completed four successful tackles.

A successful evening for Sancho, Carrick and United

On Saturday, Manchester United were handed their fifth league defeat of the season. The 4-1 scoreline against Watford was staggering to many, and club legend Solskjaer ultimately paid the price.

The Norwegian adored the football club, and he couldn’t have tried harder, but ultimately the results were not strong enough.

The Red Devils looked reinvigorated tonight under Michael Carrick. They will hope that this win is a sign of brighter things ahead.

Sancho will quite possibly believe that his career at the Theatre of Dreams has officially begun tonight. Under new management, the youngster will expect to fulfil his potential as a future Premier League great.