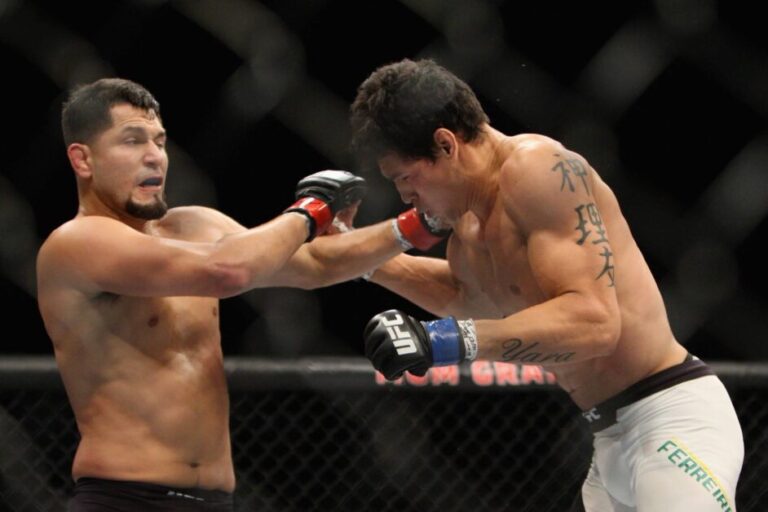 Jorge Masvidal is notorious for his fearsome power, and in 2015, he landed arguably the best knockout of his career.

‘Gamebred’ is desperate to return to winning ways in his upcoming grudge match against Colby Covington at UFC 272. The Miami native’s livelihood is well and truly on the line, following back-to-back losses.

Read: How did Jorge Masvidal and Colby Covington go from friends to enemies?

Following a triad of remarkable victories in 2019 against Darren Till, Ben Askren and Nate Diaz, Masvidal became one of the biggest stars in the sport. His anytime, anyplace attitude resonated with fans and helped him develop a considerable following.

But after a stunning stoppage defeat against Kamaru Usman, the BMF Champion needs a big victory. However, the task ahead of him on March 5 is nothing short of a monumental challenge.

Covington is a supremely-gifted wrestler with better cardio than the entire division. But Masvidal can put out any man with a single shot, and one fighter who knows this all too well is Cezar Ferreira.

‘Gamebred’ had still accumulated a cult-like following even before his breakout year. Hardcore UFC fans couldn’t wait for his fights. They knew that excitement was guaranteed every time he set foot in the cage.

But in 2015, he produced a moment that was even more shocking than expected. In a welterweight fight at the Ultimate Fighter Finale, he took on the 6ft 1in, 205lbs Cezar Ferreira.

The pop-cultural icon found himself pinned against the cage by his Brazilian opponent in the first round. But it didn’t take him long to turn the tide. He exploded forward with a vicious elbow, sending his adversary tumbling towards the canvas.

Masvidal lept on him with ruthless aggression and finished him with a stunning display of ground and pound. He has recorded 16 wins by knockout during his MMA career, but this was one of his finest.

The display won Masvidal the ‘Performance of the Night’ bonus. He then lost his next two fights, but bounced back by defeating Ross Pearson by unanimous decision at UFC 201. He beat Donald Cerrone in a UFC welterweight title eliminator six months later.

Of course, Covington will make for a far more demanding challenge than the one the American faced against Ferreira. But Jorge Masvidal only ever needs one shot to get the knockout – and we’ve just seen precisely why. If ‘Chaos’ takes him lightly, then he could be made to pay the price.