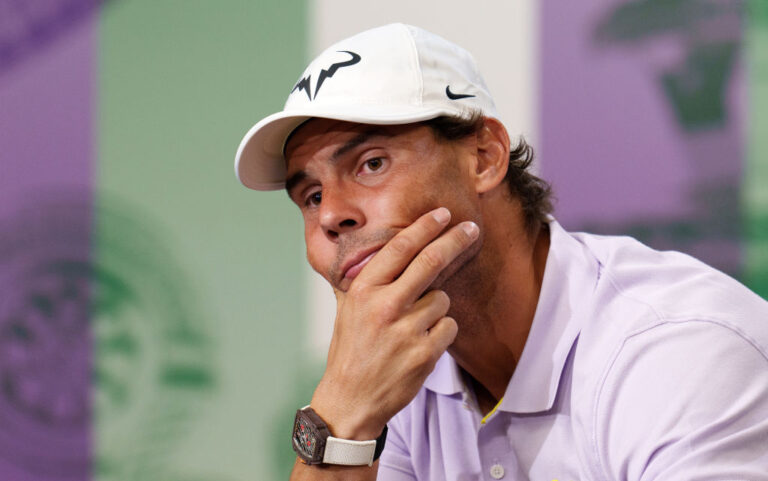 Why has Rafael Nadal pulled out of Wimbledon? We’re looking at the reason behind the tennis icon exiting the competition without being beat on the court.

Spanish tennis fans were desperate to see their hero pick up a 23rd Grand Slam title. But sadly, they’ll have to wait. After beating America’s Taylor Fritz in the quarter-final, the 36-year-old looked like he could reach the pinnacle of the sport once again. However, it appears we’ll never know.

Nadal has had to withdraw from the competition in the last four. This has cost him the £1,075,292 pay cheque that he would have picked up had he made the final. And had he won the entire thing, the player would’ve bagged a whopping £2,076,725 million. Instead, he will walk away with a healthy yet somewhat underwhelming £528,484.

With so much money on the line, he wouldn’t have exited the competition unless he absolutely had to.

Why has Rafael Nadal pulled out of Wimbledon?

The two-time Wimbledon champion is suffering from an abdominal injury. Despite calls from his father and sister to quit, he pushed through the pain to beat Fritz. However, he’s now had to admit that he can no longer continue.

As per The BBC, he told reporters: “I have tried a lot of times in my career to keep going, but it is obvious the injury will get worse. Throughout the whole day, I have been thinking about the decision to make. I think it doesn’t make sense to play. I feel very sad to say that.”

The issue, while causing a disappointing event, has given one player an easy route to a mountain of cash.

What is a walkover?

Due to his opponent pulling out, Nick Kyrgios has received a bye to the final. This walkover means he will play in the famous match without having to beat anyone else. The notorious Australian has developed a reputation for his attitude problems and recently broke Wimbledon rules by wearing red trainers on the court.

Yet his talent can’t be denied. He’s a ruthless player with the racket in hand, and after winning the Australian Open Doubles earlier this year, he’ll aim to capitalise on this amazing opportunity.

This marks only the second time in the Open Era that a man has received a walkover into a semi-final or final of a Grand Slam. The last individual to benefit from this was America’s Jim Courier in the 1992 Australian Open, who avoided playing in the final four and went straight to the final round.