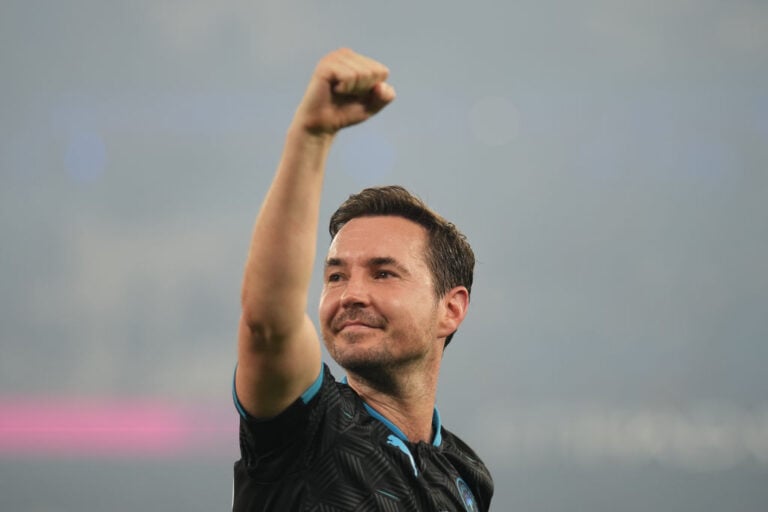 At Soccer Aid 2022, Line of Duty star Martin Compston will showcase that he has more to offer than just taking out bent coppers.

The Scot rose to fame in 2014 for his portrayal of Detective Sergeant Steve Arnott, a role which he played to perfection. With an overwhelming sense of righteousness, there wasn’t a corrupt policeman in London capable of avoiding the harsh justice of Anti-Corruption Unit 12.

The show exploded and became one of the most popular in the country, and with that have come opportunities for the cast. Compston will have the chance to represent the World XI for the second time, having featured in the side that lost to England in 2018. However, unlike most of his celebrity teammates, he has a legitimate footballing background.

Before his days of fighting crime, he attempted to forge a professional career.

After showing promise from a young age, he played for Aberdeen at youth level before signing for Greenock Morton as a professional. Compston made two appearances for the side before being met with a difficult decision.

In an interview on Si Ferry’s Open Goal podcast, he opened up about his time at the club.

The actor said: “I made my debut when I was 17. We were away to Alloa. I knew they were only going to pitch me in if we were well up or well down. I felt terrible, Alloa were winning 2-0 with 40 minutes left, and they put a third one in, and I was like, ‘You beauty’.”

He continued: “The last game of the season, we had to win to stay up, and we were playing Queen of the South, who had to win to win the league. It was a sell-out, 14,000. The atmosphere was unbelievable.

“There was some ba**ard… At half-time, I knew I was going on. So I’m spraying balls about. It smashed somebody, and he’s run on, and rugby tackled me. The stewards were just all laughing.

“It was nerve-wracking. It was Scottish second division football, but it’s like, ‘you’ve done that’.”

How did Martin Compston find acting?

However, despite his talent for the game, he couldn’t resist his calling. He made his debut in Ken Loach’s ‘Sweet Sixteen’ while he was still under contract with Greenock Morton.

“It worked out perfect,” said Compston.

“I’d just finished my exams, and I’d got my Morton contract. The auditions were at the end of the year. I went to [his manager], Peter Cormack and asked if it was alright to miss a couple of days of pre-season. We filmed it in the close season. He said, ‘You’re a fit boy, you’ll be fine’. I finished filming and went back to Greenock Morton.

“I remember being gutted because in the programme notes, the players were asked who’s their favourite actor and not one of them said me. I’d thought one of them, for a joke, would throw my name in there!”

Loach eventually told Compston that he was good enough to move into acting full-time. However, he also left the door open to continue playing football. Thankfully for Line of Duty fans, however, the actor decided he would stop playing football altogether.

“I remember when I made the decision to quit football,” said Compston.

“Morton weren’t going through the best of times. I was driving up the road one day, passing Cappielow [Morton’s stadium], and I just went in and said [to manager Dave McPherson], ‘I think I’m going to give this acting a crack’. He said, ‘Sorry to lose you’. But I didn’t find it too hard, to be honest.”

On the London Stadium stage, the actor will want to prove to the world that he retained plenty of his talent when it comes to kicking a football.