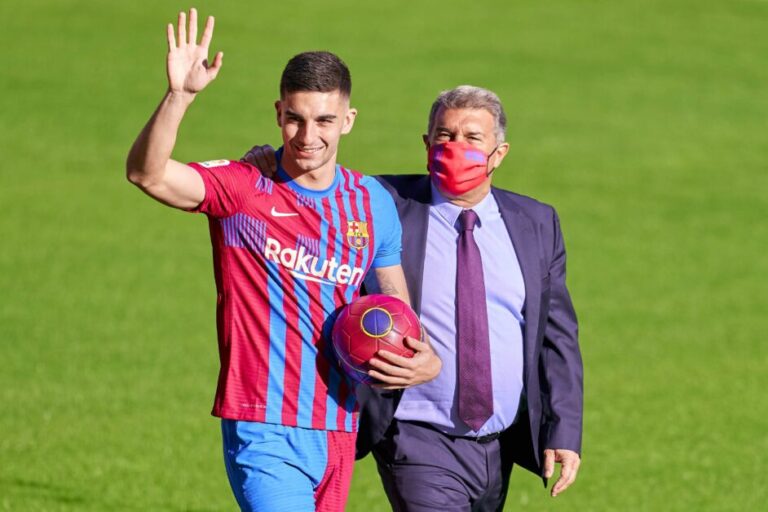 Ferran Torres has finally moved from Manchester City to Barcelona for €55 million.

The fee could rise to €65 million. That is if certain add-on conditions are met. The Spaniard is the club’s first signing under new manager Xavi.

The signing has been greeted with much fanfare from Barcelona fans. Torres impressed in his only full season with City, playing in different roles across the front three. He netted a superb hat-trick against Newcastle United in May.

The signing of Torres is meant to herald a big new era for Barcelona as they strive to get back to Europe’s elite. Those plans, though, will have to be put on hold for now.

The Barcelona debut of Ferran Torres has already been pushed back for two reasons. Firstly, the Spaniard tested positive for Covid-19 yesterday – just hours after his unveiling at the Nou Camp.

Another situation has emerged that will be all too familiar to Barcelona fans. The club cannot register their new signing.

It appears as if Barca are now in a similar position again. For Torres to be registered, Xavi’s side may need to sell some big names.

Read: Barcelona firesale: Which top stars are the club willing to sell?

Why was the Torres transfer delayed?

Barcelona had to jump over some huge hurdles to sign Ferran Torres in the first place. There were two reasons why there was a delay of 24 hours.

According to Spanish journalist Lu Martin, the club proposed that Torres return to City if they could not register him.

In addition, Blaugrana still owed money to City for a transfer involving Denis Suarez in 2013. Suarez, then aged just 20, moved to Barcelona for an undisclosed fee. He began life at the club playing for the B team.

But according to Martin, Barca had an outstanding payment to City of €1.5 million for the transfer – eight years on.

It is unclear whether the Spanish giants have ensured the transaction is complete. But Torres is now officially a Barcelona player.

How did the Denis Suarez transfer work out for Barcelona?

The story of Denis Suarez is quite something. Barcelona sold the player to Villarreal after two seasons at the club in the summer of 2015. Then, a year later, they bought him back again for £3.5 million.

Arsenal fans will remember the Spaniard’s disappointing loan spell at the Emirates Stadium in 2019. He appeared just four times for the club. After his departure, some fans and media outlets voted him as one of the club’s worst-ever signings.

He did manage to seal a €16 million move to La Liga outfit Celta Vigo that summer. Suarez has since become a regular in the side. However, he never was able to reach the potential that Barcelona hoped for back in 2013.