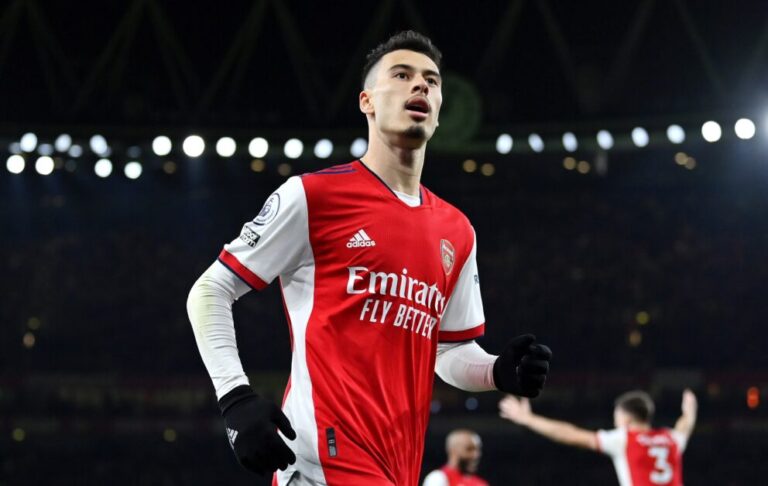 Joe Cole has heaped praise on Gabriel Martinelli, with the forward having produced several strong performances for Arsenal recently.

The Brazilian signed for the Gunners from home club Ituano in 2019. Furthermore, the Premier League giants reportedly fended off the interest of other big clubs to secure his signature.

Martinelli was immediately rated as a huge potential prospect. The forward has a natural eye for goal, is physically strong and has already drawn comparisons with Thierry Henry.

Read: Five Arsenal youngsters who could have a big 2022

It has taken him a few seasons to find his best form consistently. However, with four goals and two assists in his last six Premier League games, including a brace on Saturday against Leeds, Martinelli is now becoming a star name at the Emirates Stadium.

On Tuesday evening, his goal in Arsenal’s 2-0 win over West Ham was exemplary. The 20-year-old ran onto a through ball from Alexandre Lacazette, positioned his body around it, and curled it into the bottom corner.

Former Chelsea midfielder Joe Cole is one of many to have picked up on his undoubted potential.

The ex-England international has seen plenty that he likes in the forward, and has compared him to a Premier League legend.

Cole has likened Martinelli to a young Sergio Aguero, who terrorised the Premier League at Manchester City.

One of Aguero’s greatest strengths was his agility and balance, which set him apart from other forwards. His movement was also hard to pick up for opposing defenders.

Whilst Martinelli is of a taller frame than the Argentinian, Cole still sees one key similarity between the pair.

He told BT Sport: “I left the stadium and I was driving away. I was thinking, ‘This is the first time in 10 years that there’s something to work from with Arsenal. There’s a base’.

“This lad is outstanding, Martinelli. I’ve always been a fan of his. He reminds me of a young Sergio Aguero, who is busy, just like Alexis Sanchez.”

What made Aguero so special?

What the 33-year-old stand out was the range of goals that he scored. He was a predator inside the area and would tuck away almost every chance with either precision or power.

An Aguero hallmark was his ability to fire goals in at the near post. The Argentinian would embark on a mazy dribble in the penalty box around a defender before smashing an unstoppable strike into the roof of the net.

His positioning was also outstanding. The 33-year-old would almost always put himself in the best possible place to meet a cross or pass to add to his goal tally.

The forward was one of a kind – which made his retirement from football earlier this week all the more gutting.

Read: Five of the saddest football retirements of all time

Gabriel Martinelli could well be the man to take on Aguero’s mantle as one of the Premier League’s most feared forwards. That may seem like a bold statement to make at this stage of the Brazilian’s short career. But all the base attributes are there to build upon. In addition, being able to finish like Thierry Henry does you no harm either.