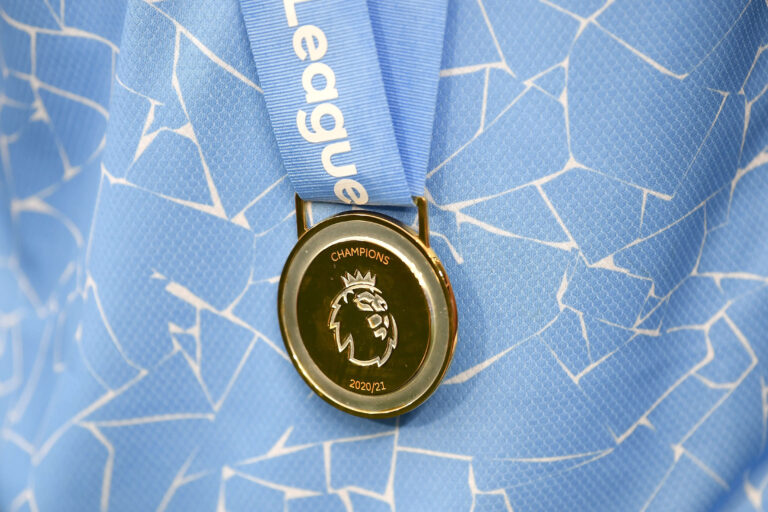 A prediction graph has calculated the likelihood of each of the 20 Premier League teams winning the English top-flight title this season.

As of this weekend, Manchester City currently have the honour of leading the division. They defeated Watford 3-1 at Vicarage Road on the same day. Chelsea, meanwhile, lost 3-2 at West Ham to relinquish the top spot.

Liverpool also briefly held the lead of the division on Saturday. They won 1-0 against Wolves at Molineux to head the table by one point. City’s result later on in the day, however, meant Pep Guardiola’s side usurped them at the top.

That shows how incredibly close the race for the Premier League title currently is. Before Saturday’s games, City, Liverpool and Chelsea all had the opportunity to lead the division for a spell – and that’s precisely what happened.

With only 15 of the 38 fixtures played by most clubs this season, there’s sure to be plenty more drama still to come. But who is most likely to lift the title come May, according to the data? Let’s take a look:

The team at FiveThirtyEight has put together a prediction table that assesses each side’s chances in the Premier League this season.

The model predicts that Manchester City are most likely to be crowned champions for what would be the second consecutive season. They have a 0.480 (48%) chance of winning the title.

Liverpool, meanwhile, have a 40% chance. Jurgen Klopp‘s side last won the title in the 2019/20 season. According to the data, they could finish on 86 points – two behind City.

Thomas Tuchel‘s Chelsea have an 11% chance of winning the Premier League.

All three sides are overwhelmingly backed to qualify for the Champions League. West Ham, meanwhile, are predicted to have a 38% chance of reaching Europe’s premier competition.

The Hammers have never qualified for the European Cup/Champions League. They have played in the UEFA Cup/Europa League on five occasions, including this term. David Moyes’s side have already qualified for the last 32 stages as group winners.

Manchester United are forecast to have a 25% chance of qualifying for the Champions League. Failure to do so would undoubtedly be a disappointing result for the Red Devils. Under the new interim management of Ralf Rangnick, they will be hoping for better.

Who is most likely to get relegated?

The model predicts that Norwich will sit at the foot of the table, with 31 points from their 38 games. They have a 71% chance of going down.

It also forecasts that Eddie Howe’s Newcastle have a 68% chance of going down, despite the potential of big spending in January. The Magpies finally won their first game of the league season at the 15th time of asking on Saturday, defeating Burnley 1-0.

Sean Dyche’s side are predicted to join them in the bottom three. They are forecast to record 36 points and have a 41% chance of returning to the second tier. It could be a close race with Watford, who the data predicts will finish just one point ahead.