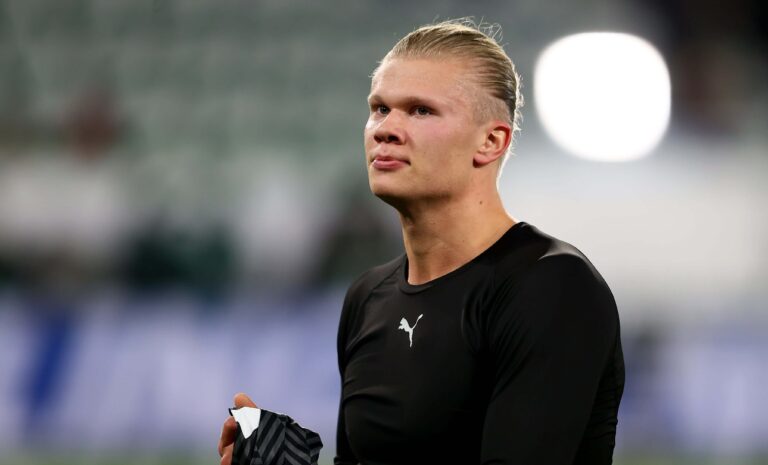 New Manchester United interim manager Ralf Rangnick has denied claims that he has an ‘Erling Haaland clause’ in his contract with the club.

Rangnick, 63, was officially appointed as interim manager last week until the end of the season. Furthermore, he received his work permit on Thursday.

One area in which United fans will hope the German can exert considerable influence is player development. Rangnick is renowned for utilising a high-intensity, pressing style of play similar to that used by Jurgen Klopp at Liverpool.

Another area is the transfer department.

The Red Devils lack a midfielder in the mould of Roy Keane, who would power through opponents and control the central area of the pitch.

But United fans are also keen to see a new striker head through the doors at Old Trafford. Erling Haaland has been continuously linked with the club in recent years.

What are claims of a ‘Haaland clause’?

German publication BILD claimed that if United sign Haaland, Rangnick will receive a €10 million bonus on top of his original contract.

The German coach does have previous links to the 21-year-forward. Ralf Rangnick formerly worked as head of sport and development at the Red Bull Group whilst Erling Haaland played for RB Salzburg.

United fans are hoping, therefore, that the connection between both men will result in a positive transfer outcome.

Speaking in his first press conference as United interim boss, Rangnick was quick to dispel any claims of a ‘Haaland clause’ in his contract.

In addition, the same goes for any other player.

“I mean, this is nonsense obviously. Of course there are no such clauses in my contract.”

Is Haaland available for transfer?

This year, Haaland has scored 38 league goals for Borussia Dortmund. Those goals have arrived in the same number of games.

Understandably, then, plenty of major teams are interested in signing him.

A boost for the Red Devils, and any other interested parties, could come in the form of Borussia Dortmund CEO Hans-Joachim Watzke’s recent comments to a question on Haaland’s release clause. At the German club’s AGM, Watzke confirmed a verbal agreement between the club and player. However, he failed to say whether a release clause – which has long been speculated – is in place.

He stated: “I cannot confirm a release clause. There is, however, a [verbal] agreement between club and player.”

Indeed, top figures from across the world of football will be keeping their eyes firmly focused on developments.