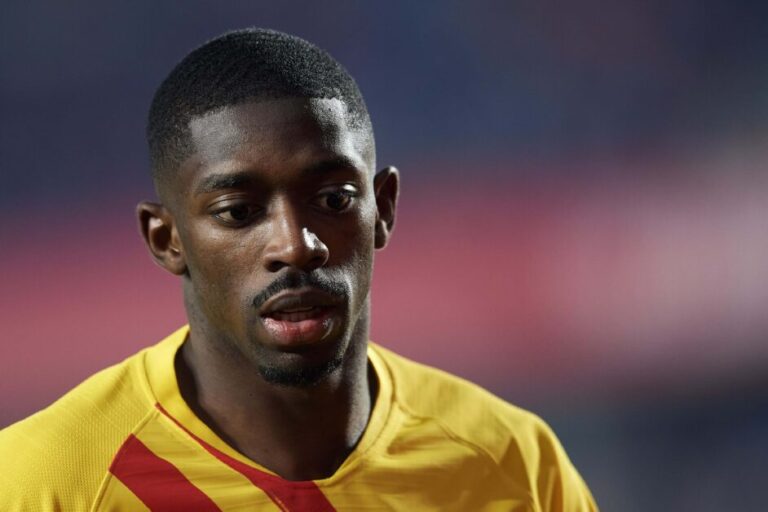 The long-running contract dispute between Ousmane Dembele and Barcelona finally looks to be over.

The Frenchman’s contract expires in the summer, and most of the talk surrounding the club over recent months has been whether one of their star players would renew.

From Barca’s side, their sole motive appeared to be to convince Dembele to renew, but on lower wages. That would ease their player registration issues. Understandably, the winger wasn’t quite so keen.

According to club director Manu Alemany, his time at the club is almost over. He has said that Barca have told Dembele that he has to leave “immediately”.

But how did it come to this? Let’s take a look at the ugly chain of events:

At the beginning of December, Joan Laporta made a wild claim about his star man.

He told Spanish radio station TV3: “We have a very good relationship with Dembele and we want him to stay … I’m enthusiastic about Dembele. He’s a better player than Kylian Mbappe.”

At this stage, the 24-year-old had seven months left to run on his existing Barcelona contract. He was not yet able to negotiate a pre-contract agreement with another European club. Barca chiefs certainly seemed calm about the situation – but things were about to change.

Before the January transfer window, it was clear that the contract dispute revolved around one fundamental factor – money.

Journalist Gerard Romero reported that Dembele had asked for an annual salary of €40 million from the club, on top of a signing-on bonus of €20 million.

Whilst those numbers may seem exceptionally extreme, the Frenchman’s camp was concerned that Barcelona were still pressing ahead with the €55 million signing of Ferran Torres whilst negotiations were ongoing. Meanwhile, president Laporta was publicly refusing to deny that the club wanted to sign Erling Haaland.

Once it became clear that the renewal of Dembele was set to be a significant challenge, the press in Barcelona began to become far more critical of the Frenchman.

Sport called him a “liar” and “ungrateful”, while another article claimed he was a “mercenary“.

The central issue amongst all the criticism was that Dembele was unwilling to reduce his salary to ease the club’s financial pressures.

Club captains Gerard Pique, Jordi Alba, Sergio Busquets and Sergi Roberto had all agreed to wage deferrals in 2021. In Pique’s case, his new deal effectively guaranteed his Barcelona future until 2024. His existing deal ensured that the final year of his contract would only be activated based on appearances.

When the Spaniard scored in Barca’s opening day La Liga win over Real Sociedad, he received one of the loudest ovations you’ll ever hear at the Nou Camp. Dembele hasn’t been afforded that same luxury.

In recent weeks, the final signal has been made to end the time of Ousmane Dembele at Barcelona. He was not included in their travelling squad for the Copa del Rey tie against Athletic Bilbao.

Barca boss Xavi said in a press conference: “Either renew, or we will find a way out. In the end, the club has decided that if he does not renew, a solution must be found.”

Sport has published an article in the form of a ‘Dembele tracker’. They state that he has 11 days to leave Barcelona. They also claim that the “Dembele soap opera” has been ended.

Nothing has been confirmed yet. You sense, however, that once those 11 days are up, Ousmane Dembele will be playing for another club. Alternatively, he could wait until the summer. However, the Barcelona press are unlikely to be any less scathing.