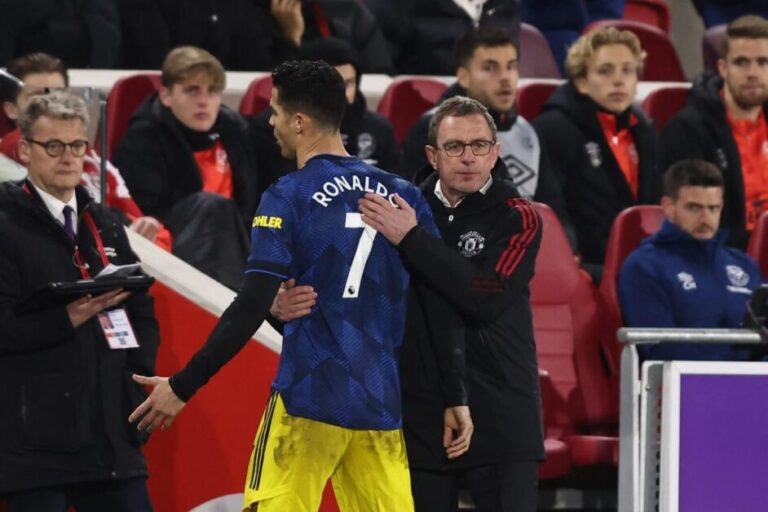 Manchester United got back to winning ways on Wednesday evening with a 3-1 victory over Brentford at the Brentford Community Stadium.

Anthony Elanga, Mason Greenwood and Marcus Rashford – all United academy products – got on the scoresheet for Ralf Rangnick’s side. Ivan Toney scored a late consolation for the hosts.

Despite the scoreline, United were indebted to goalkeeper David de Gea throughout. The Spaniard made seven saves in total as Brentford consistently probed their opposition’s box.

One significant boost for United fans upon the team news being released was the return of Cristiano Ronaldo. The 36-year-old had missed his side’s last two games through injury.

He had a relatively quiet evening by his standards, although he hit the crossbar with a header on 48 minutes. It was an incident later on, however, that made the headlines.

On 71 minutes, Ronaldo’s iconic number seven appeared on the fourth official’s board. At 2-0 up, and with Brentford continuing to press for opportunities, the defensive change made sense. Red Devils captain Harry Maguire was replacing the forward.

Ronaldo, however, was furious. As he walked towards the dugout, he told his manager: “Why me? Why me? Why would you take me off?”

Tempers then continued to flare. The forward then threw his club jacket to the ground. He took his seat, shaking his head and muttering to himself.

Speaking after the game had finished, Ralf Rangnick was in a philosophical mood about the decision to take Cristiano Ronaldo off.

The Red Devils came into the game off the back of a 2-2 draw against Aston Villa. Rangnick’s side were 2-0 up on that occasion before conceding late goals to Jacob Ramsey and Philippe Coutinho. The German coach was keen not to see a repeat against Brentford.

He explained: “I said, ‘Listen, I have to take the decision in the interest of the team and the club’.

“We had exactly the same situation at Villa Park, being 2-0 up with 15 minutes to play. Of course, we didn’t want to make the same mistake again.

“I switched to a back five with Harry Maguire, and brought on Marcus [Rashford] as another fast winger on the right-hand side. I think it was the right decision.

“When we scored the third goal, I said, ‘Look, Cristiano, I know you’re still ambitious and want to score yourself, but maybe a couple of years when you’re a head coach yourself, you will hopefully take the same decision’.”

Tempers may have flared between player and manager, but Rangnick got the result he and United so desperately required. They are now just two points off the Champions League spots, although fifth-placed Tottenham Hotspur have a further three games in hand.