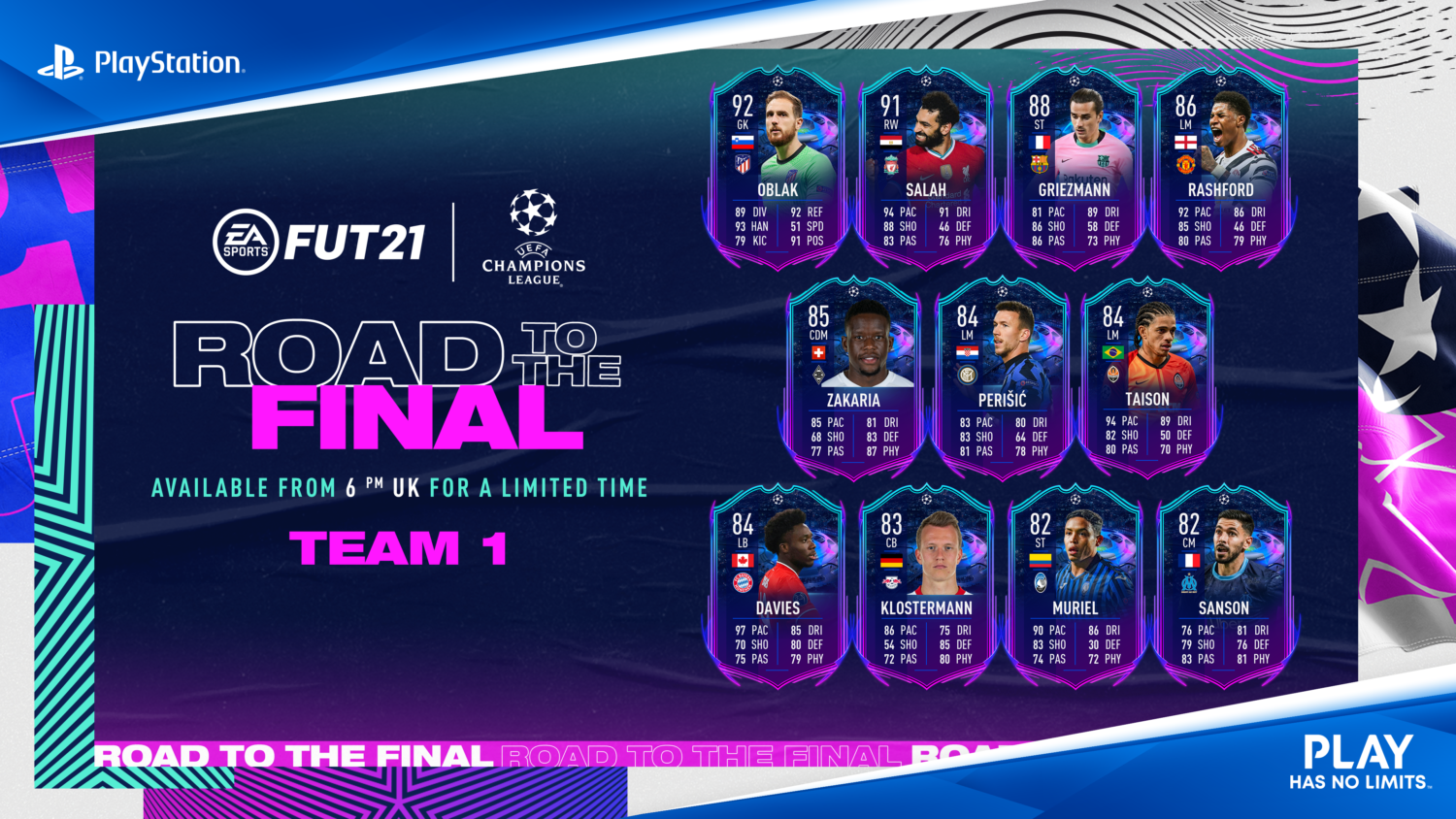 The Rulebreakers promo is over and I, along with many others, are now regretting not getting that Ike Opara card after grinding the MLS objectives.

Fear not, another promo is here for FIFA 21 in the form of Road to the Final Team 1.

This campaign focuses on special dynamic player items that upgrade throughout much of the FUT 21 cycle.

Upgrades are predicted on team success rather than individual.

A player doesn’t need to even appear in a specific match (or round as the competitions involved progress) in order to earn an upgrade; they simply need their team to prevail.

If you’ve been involved in any way with the RTTF campaigns of past, you’re probably pretty well versed with the mechanisms already.

But if you’re new or not as well acquainted, essentially, if a player’s club completes a series of team-oriented goals (advance to the knockouts, win your first knockout match, make it to the quarterfinals, semi-finals, final, or win the whole thing!) in the UEFA Champions League or UEFA Europa League European competitions, they get an in-form equivalent upgrade each step of the way.

Now let’s look at the first set of players:

Wow! Some very nice cards in there already that will turn into monsters should their teams progress in Europe.

Here’s our top 3 players to look out for:

He’s already got a +1 overall from his base card and this card will fly up in price should Liverpool advance from Group D.

Jurgen Klopp’s side are in pole position after 3 games, maintaining a 100% record – scoring 8 goals and conceding 0.

With qualification secured with a win v Atalanta in Matchday 4, Salah’s card should be first on your shopping list.

He’s currently out injured but he’ll still get upgrades if Bayern Munich progress in the Champions League.

Similar to Liverpool, they have a 100% record and will qualify with a win v Red Bull Salzburg in Matchday 4.

Already one of the best left backs in the game alongside Ferland Mendy, this card will be a nightmare to play against should Bayern Munich go all the way like last season.

In FIFA 20, Kinglsey Coman and Leon Goretzka both received 95 rated cards so this will definitely be similar.

Where do we start with this guy? Frustrating to play against his base card so this will be controller breaking territory!

RB Leipzig reached the semi-final of the Champions League last season and Angelino received a 91 rated card for their efforts.

He had 97 pace, 92 defending and 91 physical so imagine Klostermann with those stats?!

A special mention to Denis Zakaria and Marcus Rashford too. Both already have amazing base cards, the latter with an in-form too, but these two will be sky high in price at the start.

Manchester United’s form is hit and miss this season but Rashford should at least get one upgrade on the card.

Borussia Monchengladbach, despite Zakaria being out since March, currently top Group B ahead of Shakhtar Donetsk, Real Madrid and Inter Milan.

With draws against the latter 2 teams and a 6-0 hammering of Shakhtar this week, there’s a decent chance of them progressing into the knockout stages.

As well as the full team, Squad Building Challenges and unlockable player objectives will be available for Champions League and Europa League items.

This promo is GOOD and we’re praying we can pack at least 1 of the cards.