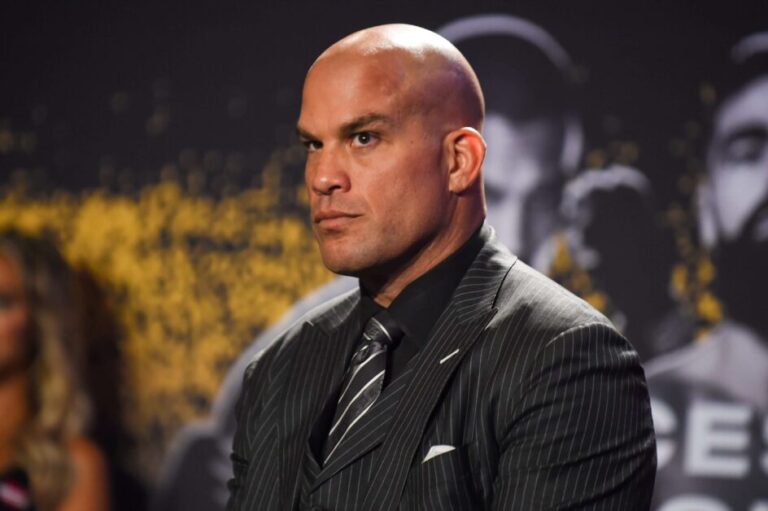 Tito Ortiz has shown his support to Francis Ngannou by delivering a hard-hitting message to the UFC.

At UFC 270 on January 29, ‘The Predator’ successfully defended his world heavyweight title. He struggled with his opponent’s footwork early. But he eventually found a home for his reinvigorated grappling game and dominated the final three rounds.

However, although this performance was arguably the most impressive of his career, there’s no guarantee that he’ll set foot in the cage again. The Cameroonian isn’t happy with the money he’s making in the UFC. He was paid $600,000 for his first title defence, whereas Tyson Fury made $30 million for his last boxing bout. It is apparent, therefore, as to why he has spoken about potentially switching to the squared circle.

The fighters hit back

He’s not the only person to speak out against the company. Mark Hunt has slated the promotion on many occasions, as have Stipe Miocic and Tyron Woodley.

But the most vocal campaigner right now is none other than Jake Paul. The YouTuber has tirelessly called out Dana White for the paycheques he gives to his fighters.

Most consider Paul’s comments merely for show—just a way of keeping his name in the headlines. However, UFC light heavyweight Anthony Smith believes that the controversial boxer genuinely cares about the issue.

He told Sirius XM’s Fight Nation: “In the history of the sport, we’ve had people come from the outside, and they want to seem like they’re some saviour, and they’re going to come in, and they’re going to save us and help us, but at the end of the day, every single one of those guys has had their own endgame.

“Jake Paul has nothing to gain here, so I think I do believe it. It does sound genuine because it’s a pain in the ass. It’s hard to do, and he’s still attacking it. He’s continually bringing it up for months and months, and he’s not letting it go.”

Now another MMA legend has spoken out about his experience in the world’s premier promotion.

Tito Ortiz has shared a frosty relationship with the company. Despite being one of Dana White’s biggest ever stars, the grappler became one of the most challenging fighters to deal with.

The pair don’t like each other at all, and on a flight to Japan, they more than released that tension. Ortiz and White engaged in a fistfight whilst the fight was taking off. The businessman explained what happened to talk show host Conan O’Brien.

He said: “We were on a private plane on our way to Japan, and it was my partners, the Fertitta brothers, myself, Tito Ortiz and our matchmaker at the time, Joe Silva. Tito and I were messing around, and he put me in what’s called a neck crank.

“I was tapping, and he didn’t stop. You can seriously hurt somebody in a neck crank, especially as big and strong as Tito is. So I just started blasting him in the ribs – started punching him in the ribs – and when he let go, I just jumped up, and it was just a full-blown fistfight in the plane.

“We were literally taking off, and the plane was [going back and forth], and the Fertitta brothers had to jump in and break up the fight.”

The feud didn’t end there either. Ortiz once wore a T-shirt with ‘Dana White is my b***h’ printed on it. Furthermore, they agreed to a boxing match but, as per TMZ, the former UFC champion didn’t turn up to the weigh-in.

It seems the hatchet hasn’t been buried. Following Ngannou’s win, The Huntington Beach Bad Boy sent a vicious tweet in the promotion’s direction.

He said: “Francis Ngannou, congrats on the fight and standing your ground for the future of all MMA fighters. I did it, and they tried to erase me from the UFC’s history books. I hope they don’t do the same to you.”

The UFC wouldn’t be what it is today without trailblazers like Ortiz. His performances captivated the public, who’ve become fans for life. Therefore, it’s no surprise that he cares about fighter pay. The company is nothing without the athletes, and they deserve their slice of the pie.