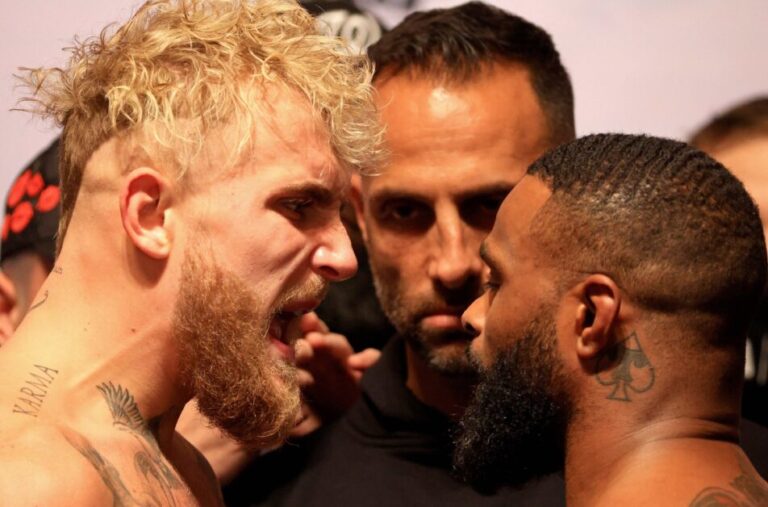 Tyron Woodley has revealed why he didn’t go for the knockout during his first fight against Jake Paul in August.

Paul eventually went on to win the fight by split decision, but it was undoubtedly a back-and-forth encounter.

Woodley, on professional debut, started the bout slowly, and his opponent landed several impressive combinations in the early exchanges.

However, as time wore on, the former UFC star grew into the bout and landed some heavy shots of his own. He hit Paul with a massive right hand in round four, which nearly dropped the YouTuber down to the canvas.

At that point, it looked like the 24-year-old may have been there for the taking. But Paul managed to get to the end of the round, and despite being the subject of several more strong shots in round five, was then able to compose himself.

Woodley had opportunities to win the fight, but a lack of a killer instinct – perhaps brought on by inexperience in a professional boxing ring – meant he couldn’t get the job done.

The pair will now meet again on Saturday evening in Tampa, Florida. The 39-year-old took the fight at short notice after Tommy Fury pulled out from his planned bout with Paul.

Read: Tommy Fury training footage sparks theories as to why he pulled out of Jake Paul fight

Whether that impacts the performance Woodley can put in is unknown. But one thing is for sure – he will be all the wiser for the events of his first professional fight.

Woodley explains why he didn’t knock Paul out

Speaking in the pre-fight press conference, Woodley explained that he had researched how Paul had won his previous fights against Ben Askren and Nate Robinson.

The former UFC star felt that being patient was the best form of attack, even when his opponent was on the ropes in the fourth round.

“Jake has shown in his fights, you watch the Nate Robinson fight, you watch when he knocked out Ben Askren, he wasn’t really looking at them at the time. They walked forward, he looked like he was going to unload on Ben’s body. Then he came over the top. Nate rushed in and ran into a right hand.”

Woodley then praised Paul for one particular boxing attribute that has made him so dangerous – and added another explanation for why he couldn’t quite land the big blow on his opponent.

“You’ve got to respect power,” he added.

Read: Jake Paul compares himself to Muhammad Ali ahead of Tyron Woodley rematch

“I’m not going to sit up here and act like he doesn’t have power. He does have power. I have power. That’s why you guys want to see this fight again. So when I was looking at that [first fight], I actually punched him until he was under the first rope, landed on the second rope, hooked on the third rope and sitting on the fourth rope.

“We went into the boxing ring earlier that day and we noticed how tall the top rope was. It was really in the back of my head. At that point, we started measuring the second and third rope. Those ropes were really loose, so they went to tighten those ropes up.

“To be honest, when I punched him, he actually sprung back into the ring based on those second and third ropes … when he came back in, I was trying to punch him again, I actually wrapped around his back.

The highly-anticipated rematch between Jake Paul and Tyron Woodley takes place on December 18 at the Amalie Arena in Tampa, Florida.

There is an undercard, which will consist of four different bouts. The show is scheduled to begin at 2am UK time on Sunday morning.

Read: Jake Paul net worth: How much has the divisive YouTuber earned in boxing?

The fight is available via a live stream provided by FITE TV, which can be purchased for $23.99.