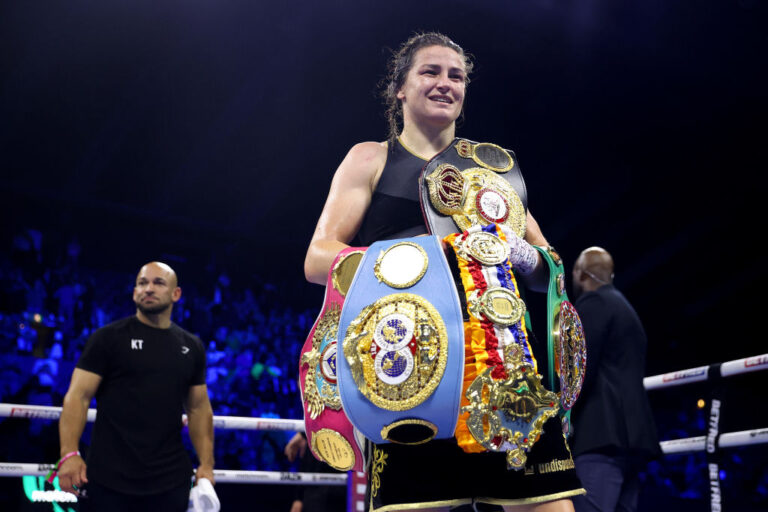 Boxer Katie Taylor has challenged Amanda Serrano to a rematch after securing a sensational victory over Karen Elizabeth Carabajal this weekend.

Taylor successfully defended her world lightweight titles at Wembley Arena on Saturday 30 October, where she won via unanimous decision.

Who will Taylor face next?

But, the star is not planning to rest on her laurels for long. Instead, the Irish boxer is already turning her attention towards the next potential fight.

Following her Wembley victory, Taylor called out fellow boxer Serrano and used her post-fight interview to ask for a rematch.

It was also the first time that two women had ever headlined a boxing event at the legendary New York venue.

The Bray Bomber has never fought professionally on Irish soil

Now however The Bray Bomber is keen on facing Serrano again, but this time on home soil.

Interestingly, Taylor has never actually fought professionally in her native Ireland. However, it’s clear she is ready and willing to make her mark in her own country.

“Regardless of whether it’s Amanda Serrano, we want the fight at Croke Park – 80,000 people – that would be the biggest event in women’s boxing history,” Taylor continued.

Following the callout, Serrano herself took to Twitter to post the following statement, ‘Congratulations @KatieTaylor 2023 We Dance AGAIN!”

So, while a rematch is yet to be officially scheduled, Serrano’s response looks as if the professional boxer is up to the challenge next year.

Following Taylor’s rematch request, Promoter Eddie Hearn has also promised that Taylor’s next bout will be in Ireland.

In a press conference, Hearn reportedly said, “We have kind of dug ourselves a hole now, I’ve said it. It’s happening and it is next. Whoever it is, it will be in Ireland.”

“I would like to be in a position where even by the end of next year we know if that’s a reality, Croke Park, because there’s a lot of work to be done,” he continued. “This is our one shot… next summer… Croke Park. The one shot to make it happen.”

The Matchroom Sport Chairman then praised Taylor for her trailblazing career. He said that “no one deserves it more than Katie Taylor.”

“Six years ago we were here and people were laughing at us. Katie Taylor has been treading paths for others to come down. She is a legend in this sport.”

When will the fight at Croke Park take place?

So, when will see Taylor headlining a fight at Croke Park? At the time of writing, a confirmation of a fight at the venue is yet to be announced.

However, according to Hearne, he doesn’t “want to drag it out until March or April saying to Katie ‘yeah it’s coming’.”

Hopefully, this means we will be seeing an official fight announcement sooner rather than later.

So, keep your eyes fixed on SPORF for more on this story as it develops.