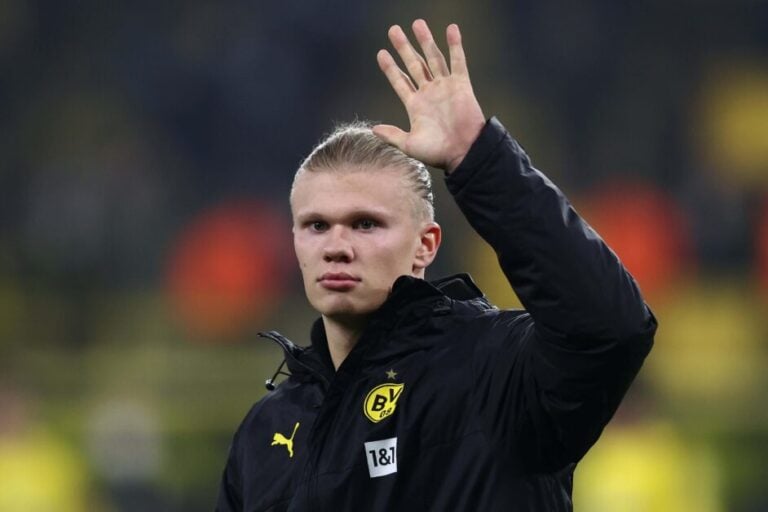 Barcelona have already spent big in January with the €55 million signing of Ferran Torres – and now it seems like they are turning their attention to Erling Haaland.

Most clubs around Europe have expressed interest in the Borussia Dortmund striker. The 21-year-old has taken world football by storm in the last few seasons. His unique mix of skill, power, aerial ability and speed has made him arguably the most sought-after player in the world.

Barcelona is one club that hasn’t made huge noises about potentially signing him. The Spanish giants have had significant financial problems, which has put the focus on selling players rather than buying them.

But that has recently changed. Thanks to a €525m Goldman Sachs loan secured by president Joan Laporta last summer, Barca now have the funds to compete for major signings.

The main issue is that they still can’t register players due to their salary cap. But that hasn’t stopped Laporta from refusing to publicly deny that the club could complete the signing of Haaland.

Speaking at the presentation of Ferran Torres about potentially arranging a deal for the Norwegian, he said: “All the great players think about joining Barcelona. We’re still a point of reference in the transfer market.”

Haaland is one of the best number nines on the planet, and Barcelona certainly need a player to fill that role.

Luuk de Jong is currently on loan from Sevilla but is unlikely to remain at the club beyond this season. Martin Braithwaite, meanwhile, has only netted five goals in 43 La Liga appearances for the club and has been injured for much of this campaign.

Memphis Depay has impressed in spells after signing from Lyon last summer, but he is also injured. Ousmane Dembele‘s future beyond this summer has not yet been cleared up. Barcelona’s squad is threadbare in attacking areas.

However, according to Spanish outlet Marca, there is another critical reason why Barca want to complete the deal. Real Madrid.

Some Spanish football fans will know all about the signing of the legendary Alfredo Di Stefano. The striker played for Colombian side Millionarios but was owned by River Plate in Argentina.

Both Barca and Real agreed to deals with one of the clubs, which eventually led to a situation where, after government intervention, Di Stefano could play for both of the Spanish giants. He ultimately spent seven months out of the game, and Barcelona allowed him to move to Real Madrid. With Di Stefano in the side, Real won five consecutive European Cups between 1956 and 1960.

It seems that Los Cules are desperate to prevent a repeat of that situation regarding Haaland. Marca claims that Joan Laporta would see an attacking trio of Haaland, Kylian Mbappe and Vinicius Junior as a “near-fatal blow” to Barcelona’s long-term hopes. The stakes could not be higher.

How much would Haaland cost Barcelona?

The answer to this is likely to be a lot of money.

Fans long assumed that Erling Haaland had a release clause in his Borussia Dortmund contract that would allow him to leave. German media outlet Sport 1 reported (as per AS) in August that his release clause had been increased to €90m. At that price, top European clubs would no doubt circle.

However, comments from Dortmund’s CEO last month contradict these claims. Hans-Joachim Watzke said at the club’s AGM: “I cannot confirm a release clause. There is, however, a [verbal] agreement between club and player.”

That suggests that Dortmund may be willing to sell should an acceptable offer come in for Haaland. It may well come down to a bidding war between Barcelona and Real for Erling Haaland – and maybe our very own modern-day Di Stefano scenario.