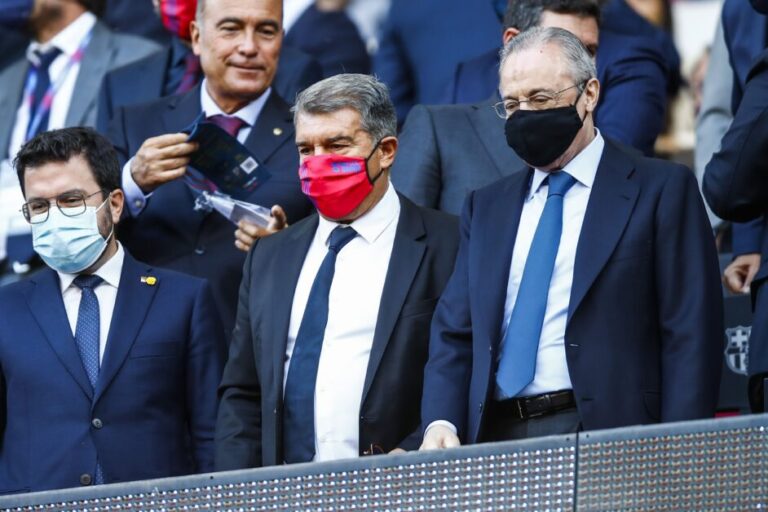 It is the image many Barcelona and Real Madrid fans will never have envisaged – the presidents of both clubs symbolically shaking hands on an agreement.

‘El Clasico‘ is arguably the most heated rivalry in world football. The two teams have topped Spanish football for the best part of the last 80 years.

The aftermath of the Spanish Civil War. The European Cup. Florentino Perez. Three very contrasting reasons as to why Barcelona fans hate Real Madrid – and there are more. There isn’t much love in the other direction either.

One of the most symbolic events of the rivalry is that of the transfer of Luis Figo. In 2000, he made the hugely controversial move directly from Barcelona to Real Madrid.

Florentino Perez agreed on a deal during his presidential election campaign that meant Figo had to join Real if he won. The Spaniard did achieve success, and Figo couldn’t get out of the contract. He would have had to pay a penalty fee of £18.75 million to do so.

What happened next was extraordinary. When Figo returned to the Nou Camp with his new club, he was pelted with coins and lighters. One fan threw even a pig’s head onto the pitch. The noise of hatred was deafening,

It appears complex – or perhaps not, depending on which way you look at things – to believe that the two clubs would ever agree to a pact between one another with all that in mind. But that is exactly what has happened. Let’s take a look as to what has been reported:

The ‘non-aggression pact’ between Barcelona and Real Madrid

According to Spanish outlet Marca, the two clubs have agreed to the pact solely based on transfers.

Fans will remember the first era of Perez’s presidency at Real Madrid, where the Spanish giants went around the world snapping up the world’s best players. Figo was one of the first Galacticos.

There have been tenuous links to Barca legend Lionel Messi over the years. And they attempted to pounce to sign former Barcelona players. Cesc Fabregas, after he became established at Arsenal, is one example.

The latest rumour is that Real are interested in signing Barca defender Ronald Araujo on a free transfer. The 22-year-old is out of contract with the club at the end of next season.

Araujo has been one of the top performers at the club this season. He is exceptionally comfortable in the ball, strong in the tackle and provides a serious goal threat. He made headlines earlier in January after breaking his hand – then playing against Real just days later.

Without a doubt, the loss of the Uruguayan would be a massive blow to Barcelona. Marca are claiming that, to stop such an occurrence, Barca president Joan Laporta has reminded Florentino Perez of a pact that neither team would attempt to sign each other’s players if they were under contract. Perez reportedly agreed.

The same report states that if a player were to end his contract or allow it to expire, the situation would be different. Essentially, if Araujo does not extend his contract with Barcelona before the time at which he could sign a pre-contract agreement, Real may swoop.

The major takeaway from this is that while the two clubs are fierce rivals, Spanish football would arguably be worse off if both were not firing on all cylinders. Barcelona sit seventh this season in La Liga. Although their struggles have increased the league’s competitiveness at the top end of the table, it has been detrimental to one of world football’s biggest rivalries.