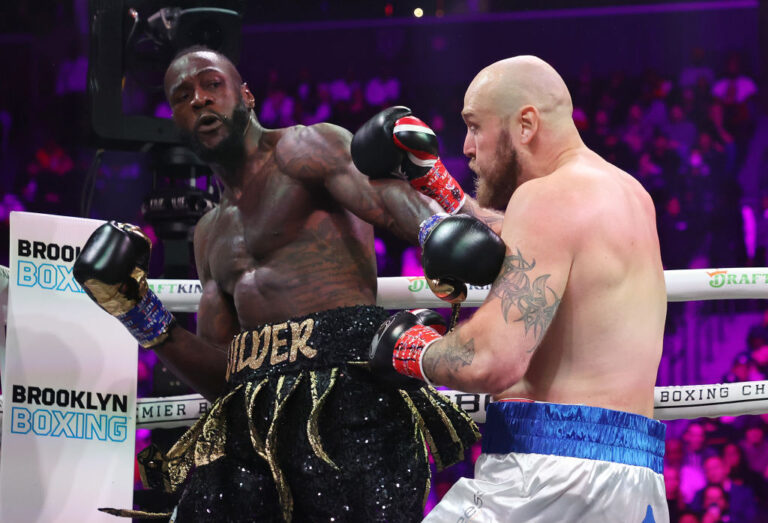 After a long absence from the ring, Deontay Wilder returned on Saturday night with an explosive finish over Robert Helenius.

The 36-year-old made his comeback at the Barclays Centre in Brooklyn, New York, against a solid opponent, Helenius.

‘The Noric Nightmare’ pinned his adversary up to the ropes and looked to land a right hand. But Wilder beat him to the punch, rendering Helenius unconscious in the blink of an eye.

And in the process, the boxing icon broke the record for the least punches landed in a KO victory with just three connecting in the entire fight.

Robert Helenius entered the contest on a high

Wilder’s foe, Helenius entered the contest off the back of two career-best victories over Adam Kownacki.

Therefore, on paper, he had the minerals to give Wilder a serious test. But it didn’t prove that they way in the ring.

The Bronze Bomber’s reputation proceeds him

In boxing, certain fighters develop reputations. When fans watched Floyd Mayweather, they knew they were going to get a masterclass, and when tuning in to Muhammad Ali, they were excited about the entertainment the Kentucky heavyweight was about to bring.

The same applies to ‘The Bronze Bomber’. Every time he sets foot through the ropes, he has the spectators on the edge of their seats because every single person in the arena is painfully aware that he can end the fight in a single second.

Prior to his bout on October 15, Wilder shared thirty rounds with Tyson Fury. The two rivals despised one another, making for one of the greatest trilogies in boxing history.

And while the American’s excuses in the second bout left his reputation at an all-time low, he redeemed himself with his performance in their final contest.

Wilder gave it his all and even put ‘The Gypsy King‘ on the canvas on two separate occasions.

But ultimately, the 6 ft 9 giant ground Wilder down before stopping him with a violent knockout.

However, after such a hellacious beating, fans questioned whether Wilder would ever be the same again. But after bouncing back with an incredible victory over Helenius, the ex-WBC King is back and possibly better than ever.

Consequently, those who jumped off the Wilder train have hopped right back on and now eagerly await the next stop, which as of right now, looks like Andy Ruiz Jr.