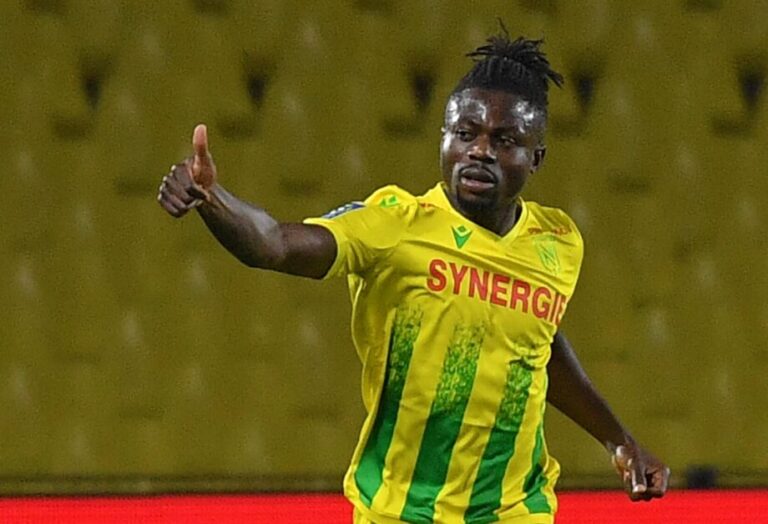 The Africa Cup of Nations (AFCON) is one of the most exciting tournaments in the world – and a chance for players to impress on a big international stage.

In the last six editions of the competition, six different nations have lifted the trophy. The current holders are Algeria, captained by Manchester City’s Riyad Mahrez.

Read: Africa Cup of Nations: The players that will miss Premier League games

AFCON will see an abundance of talent taking part in the competition. Fans will already know all about the likes of Mohamed Salah, Sadio Mane and Kalidou Koulibaly.

We’ve taken a look at five players who could have a considerable impact at AFCON 2021 but who may well have flown slightly more under the radar than those names before the tournament:

Moses Simon has been one of the most consistent wingers in Ligue 1 for the last two and a half seasons.

Since joining FC Nantes in 2019, he has scored 15 goals and provided 17 assists in league competition. He began this season on fire, with five assists in his opening six games of the campaign.

Those numbers have tailed off since, but Simon is one of the players who will surely be a massive threat throughout AFCON. The 24-year-old has pace in abundance and skill and composure on the ball to beat defenders. His crossing is also pinpoint, and he should form a strong partnership with Kelechi Iheanacho in forward areas.

At just 19 years of age, Rennes striker Kamaldeen Sulemana will be playing in his first Africa Cup of Nations this month.

The Ligue 1 outfit saw enough potential in the striker to splash out a reported €15 million initial fee to sign him from Nordsjaelland last summer.

He has already impressed. For October, the Ghanaian international scooped the Ligue 1 Young Player of the Year award.

One of Sulemana’s main strengths is his superb dribbling from either left flank. As per WhoScored, the forward has completed an average of 5.0 dribbles per game in Ligue 1 this season – a figure only bettered by Neymar, Kylian Mbappe and ex-Southampton midfielder Sofiane Boufal. He’ll be looking to add to his five goals this season at AFCON.

Premier League fans, in particular, will be keeping a close eye on Mali midfielder Amadou Haidara throughout AFCON.

He has been heavily linked with a move to Manchester United this window. Haidara is excellent on the ball and has an eye for goal.

Crucially, his stamina and work rate makes him an important player in both boxes. If the RB Leipzig midfielder does impress during the tournament, it will surely only elevate him to even greater heights in the footballing world.

When it comes to Gabon, all attention will likely be on Arsenal forward Pierre-Emerick Aubameyang, even though he has tested positive for Covid-19 and will miss at least his side’s first game. But fans should also keep an eye out for Saint-Etienne winger Denis Bouanga.

The 27-year-old has netted 28 goals in three-and-a-half seasons in Ligue 1 since making the move to Nimes in 2018.

Bouanga scored three goals in five appearances during AFCON qualifying and can play both out wide and as a central striker. He will have to watch his discipline, having been sent off twice in his last six games for club and country, but the winger should have an important part to play in any success Gabon have during the tournament.

Ilias Chair has been tearing apart Championship defences in the last 18 months for Queen’s Park Rangers.

The 24-year-old was integrated into the first team by Ian Holloway, but it is under Mark Warburton that the exciting playmaker has really begun to shine.

Wearing the number 10 shirt made iconic by countryman Adel Taarabt, Chair fired in eight goals and provided six assists last campaign. He has six goals and three assists in 21 games this term.

Chair has missed the last three league games due to injury but has travelled to AFCON alongside his Morocco teammates.