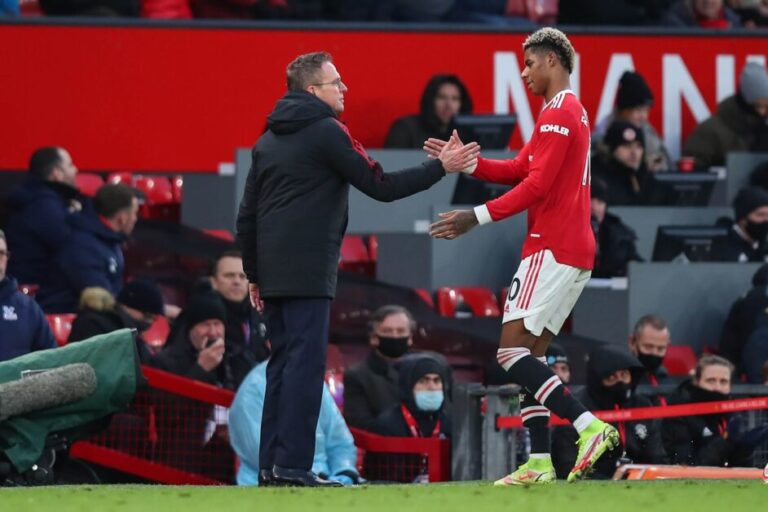 Ralf Rangnick has been in interim charge of Manchester United for just over three weeks, but he has already made a big impression at Old Trafford.

He has managed just three games due to Covid-19 postponements, but United have won both their Premier League fixtures by a 1-0 scoreline. They drew 1-1 with Young Boys in the Champions League with a largely second-string squad.

Rangnick arrived in England with a reputation as one of the most well-respected coaches in the German game. In addition, he has been an inspiration for some of Jurgen Klopp and Thomas Tuchel’s methods.

Read: Thomas Tuchel was working in a bar when Ralf Rangnick changed his life

The 63-year-old also has a background as a sporting director, leaving United fans excited about the future when it comes to transfers. When his interim period ends at the end of this season, Rangnick is set to move on to a backroom role at the Red Devils.

United made his appointment with short-term success in mind, and the club are certainly heading in the right direction. Their new boss is having a positive impact.

Read: Five facts about Marcus Rashford that every Man United fan should know

Speaking to Sky Sports ahead of their clash with Newcastle, Red Devils forward Marcus Rashford outlined exactly how Rangnick has improved United in such a short period. The 25-year-old has explained that those enhancements have started from the defensive third.

Rashford said: “The thing that was clear was that we were conceding too many goals. That’s always the starting point.

“He got us a lot more together as a team, whether that’s attacking or defending. In the last couple of games we’ve conceded a lot less chances, and it’s resulted in clean sheets.”

Rashford on intensity under Rangnick

Ralf Rangnick is famed for his high-intensity ‘gegenpressing’ style that sees his players relentlessly close down opposition players and try to win the ball back.

As the German coach explained in a 1998 interview, the style can create a scenario where every player is in the vertical half of the pitch where the ball is situated.

It can, of course, be demanding on players. But while Rashford has said the work is very intense, it is vital to win the big games.

“He involves a lot of small-sided games where the intensity is high,” he said.

“But it’s good; it’s what it takes to win big games. Even in the Norwich game, we didn’t quite get it so well in the first half, but the second half was much better. We showed that even if we’re not playing at our best, with that system it can work and it can be effective.

“If you’re within your comfort zone, you’re doing something wrong.”

Which players have benefitted the most from Rangnick’s appointment?

As Rashford indicates, Manchester United have developed as an entire team since the appointment of Ralf Rangnick.

But there have been standout performances. Fred, for instance, has been the subject of criticism at times during his career at Old Trafford. However, the Brazilian netted the first goal of the Rangnick era in the 1-0 win over Crystal Palace.

As per WhoScored, he then completed seven tackles against Norwich – three more than any other player on the pitch.

Diogo Dalot has also benefitted from more game time at right-back. He displaced Aaron Wan-Bissaka in the starting lineup for the Palace fixture before starting the next Premier League fixture at Norwich when his playing rival was injured.

There has been plenty of encouragement for Rangnick and United as they look to push towards the top four places.