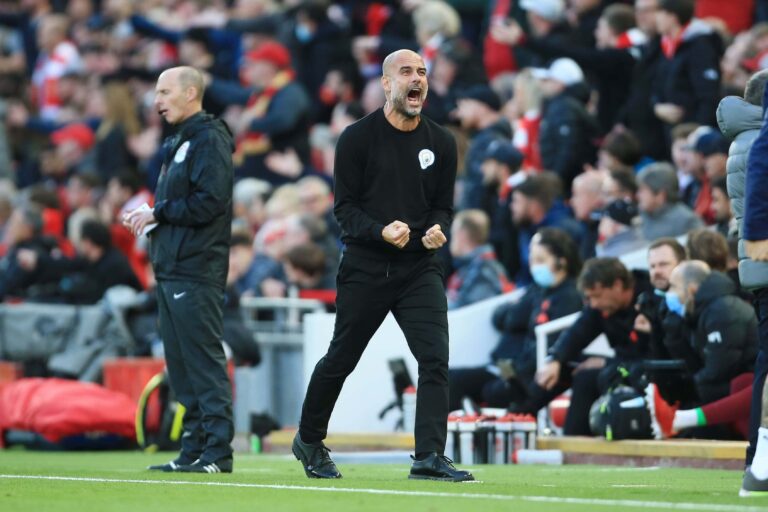 Pep Guardiola broke yet another record as Manchester City boss last night after a 2-1 win over Aston Villa at Villa Park.

The victory was his 150th win as a Premier League manager. Pep Guardiola is the quickest ever to reach the record, taking just 204 games to get there. For comparison, Sir Alex Ferguson took his 150th win in 247 games. Arsene Wenger, meanwhile, got there in 258.

Guardiola has already established a legacy as one of the Premier League’s all-time greatest managers. He has won ten trophies with the Citizens. Three of them have been league titles. City are currently reigning champions, having stormed to the title in recording 86 points last season.

With Pep Guardiola having broken yet another record, let’s take a look at five of his best Premier League victories.

We couldn’t compile a list based on Guardiola victories without including one of his famous wins over Manchester United.

Guardiola has faced United on 19 occasions across his entire managerial career, winning ten times. But the 2-0 victory over their fierce rivals at Old Trafford last month was symbolic, not just for the performance itself, but for the ease at which City strolled to victory.

When Eric Bailly scored a ninth-minute own goal for Ole Gunnar Solskjaer‘s struggling side, the dye seemed to have been cast already.

The Citizens had a stranglehold over possession and shots at goal for almost the entire match. When Bernardo Silva put them two goals ahead before half-time, it was over as a contest.

Three months after losing 6-0 to the same opponents in the 2019 FA Cup Final, Watford prepared to face City again. It would be another tough afternoon for the Hornets.

Not content to stop at six this time, Pep Guardiola’s side smashed in eight goals in what is still their biggest margin of victory under the Spaniard.

David Silva set the tone for the afternoon by scoring in the first minute. Bernardo Silva netted a hat-trick, whilst Sergio Aguero, Riyad Mahrez, Nicolas Otamendi and Kevin De Bruyne also got on the scoresheet. A demolition job.

This one was effectively a winner-takes-all match. City knew that a win would give them the Premier League title on the season’s final day. Any other result and Liverpool, who went into the day a point behind them, could take it.

When Glenn Murray put Brighton 1-0 ahead against City on the final day, Guardiola’s side were on course to lose the title. Liverpool were winning against Wolves and would go on to secure victory.

But the Citizens responded in the way they had all season – by scoring goals. Sergio Aguero equalised within a minute of City going behind before Aymeric Laporte put them ahead going into half-time. Further strikes from Riyad Mahrez and Ilkay Gundogan in the second half sealed the deal and the Premier League title.

Three months before their 2018/19 title victory, City took on a Chelsea side struggling for form under Maurizio Sarri.

Guardiola’s side blew the Blues away at the Etihad Stadium. With 25 minutes on the clock, they were already four goals up. Time and time again, City were breaking clear of the Chelsea defence. Sergio Aguero’s first goal to make it 3-0 was a thunderbolt from outside the area.

The Argentinian’s 56th-minute penalty and Ilkay Gundogan’s strike on 80 minutes put further gloss on the scoreline. But it was the opening half an hour that really did the damage.

City had never won at Anfield under Pep Guardiola before they took on Liverpool in January 2020. This clash saw the reigning champions against a Citizens side that couldn’t keep pace with them in the previous season.

However, the tables were turned on a Sunday afternoon in February at the home of Jurgen Klopp’s side. City were in the midst of what would become a club-record 15-match winning streak in the Premier League. They took no prisoners at Anfield.

It wasn’t all plain sailing. Ilkay Gundogan had the opportunity to open the scoring from the spot on 37 minutes, but blazed the ball over the bar.

The German made amends on 49 minutes, reacting quickly after Alisson saved the magnificent Phil Foden’s effort.

Liverpool went on to equalise from the penalty spot through Mohamed Salah. But two mistakes from Alisson when clearing the ball essentially sealed the game for City, who raced into a 3-1 lead. Foden then scored a sensational solo goal to extend the lead to three goals. It felt like a passing of the torch afternoon as far as the Premier League title was concerned.