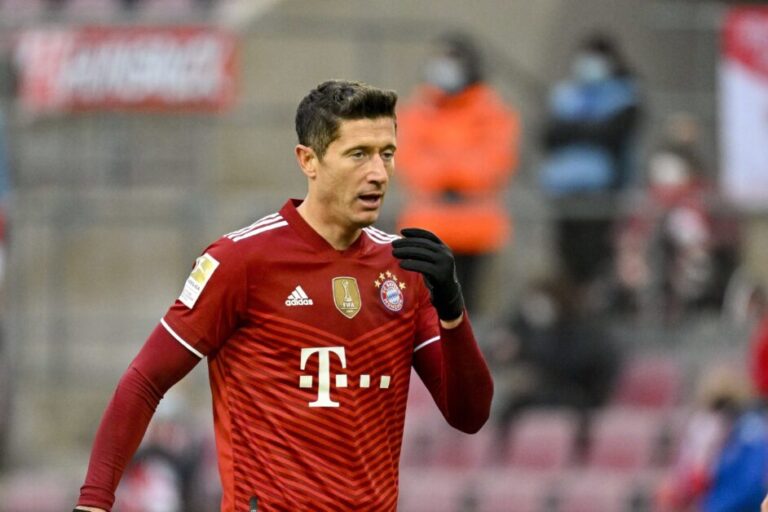 Robert Lewandowski is the best striker in world football, so it is no surprise that discussions over his future at Bayern Munich occur with regularity.

Despite his age, the 33-year-old is still wowing fans. There’s no shortage of teams vying for his signature.

In most people’s view, his impeccable performances last season solidified him as the best player on the planet, regardless of whether the Ballon d’Or award – which he lost out on to Lionel Messi – reflected that or not.

Thankfully for his fans, Lewandowski was named as The Best FIFA Men’s Player of the Year in January instead.

In the 2020/21 season, the Pole bagged an astonishing 48 goals for the German giants, significantly more than any other elite striker. He also broke Gerd Muller’s 49-year record for most goals in a single Bundesliga season.

Lewandowski is as close to the perfect player as a human being can be. He possesses a towering presence, terrifying strength, sublime balance, rapid movement, an exquisite footballing IQ, and he knows precisely where the goal is.

Therefore, it’s no surprise that the Munich club is desperate to maintain the Polish sensation’s services as we advance.

Robert Lewandowski to stay at Bayern?

In June 2023, the superstar’s contract will come to an end. Typically, in instances like these, Bayern Munich has a one-year extension policy for players over the age of 30. However, according to Marca, the club is willing to make an exception with Lewandowski’s calibre considered.

As per Bild, the German club will offer him their usual one-year renewal to stay on his current wages. However, they’ll also give him the option of a two-year deal if he’s willing to take a pay cut.

But there’s no guarantee that he’ll accept either offer, and the same report states he could be sold by the club if he doesn’t. The powerhouse has never been shy to take on a challenge, and should he become available, then the whole of Europe will be looking to sign the dynamic forward. Let’s take a brief look at three clubs he could sign for:

Robert Lewandowski to the Premier League?

In October, Lewandowski’s agent, Pini Zahavi, claimed via Sport Bild that the Pole could finally make a move to the Premier League. He suggested that the likely candidates would be Manchester City. The club failed to bring in Lionel Messi in the summer. But if they bagged the Bayern man, that scar would begin to heal.

However, the Etihad isn’t the only potential destination for Lewandowski. Liverpool boss Jurgen Klopp has already bonded with the Pole during their time together at Borussia Dortmund. Whether Liverpool would see the move as a worthy investment would be another question.

As per Football Italia, Lewandowski revealed to Gazzetta dello Sport that he’d held meetings with Real Madrid president Florentino Perez in September. But he refused to give any further details about the meetings.

Therefore, fans can only speculate about what was said in those discussions. We may not know what Lewandowski’s next move will be, but football enthusiasts are all waiting in eager anticipation to find out.