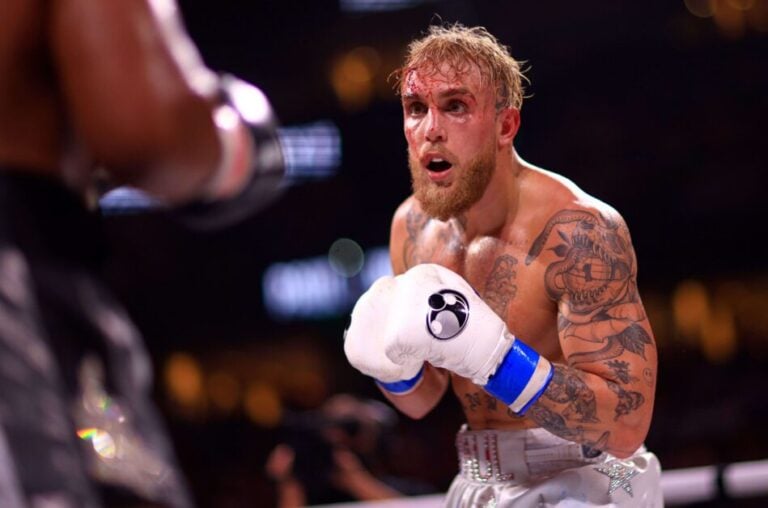 Since he transitioned into professional boxing in January 2020, Jake Paul has made quite the name for himself across the combat sports world.

The 24-year-old has gone 5-0 at the professional level. That figure includes victories over Tyron Woodley and Ben Askren, with the former of those boxers being knocked out by Paul in their rematch on December 18.

He has riled up plenty of star names in both boxing and MMA. Immediately after his KO victory over Woodley, he called out top UFC fighters Jorge Masvidal and Nate Diaz.

Paul has also targeted Conor McGregor and Floyd Mayweather in the past, whilst he has developed a feud with the Fury family.

Read: Conor McGregor earns more money per active minute than any other athlete

The YouTuber was meant to take on fellow unbeaten professional boxer Tommy Fury – the brother of world heavyweight champion Tyson – on December 18.

But that fight did not go ahead. Fury was forced to withdraw from the bout due to a bacterial chest infection and broken rib.

Earlier this week, he spoke of “unfinished business” in an interview with The MMA Hour concerning Paul. It is abundantly clear that he is still keen on sorting out the pair’s grievances inside the ring.

Despite this, it doesn’t seem like his potential future opponent shares the same wish.

Speaking in an interview with The Volume (as per talkSPORT), Jake Paul made it clear that Tommy Fury isn’t his preferred challenger when he does step into the next ring – and instead sent out a bizarre challenge to two other members of his family.

He explained: “He [Tommy] wants the payday. But I said it before. I don’t want to take the fight with him, he doesn’t deserve it.

What do John Fury and Tyson Fury think of Jake Paul?

John Fury has certainly had plenty to say about the YouTuber since he emerged onto the professional scene.

In August, before Paul’s first bout against Tyron Woodley, Fury told BT Sport: “I could actually like that kid. Because at 24 years old, he’s showing a fantastic mindset and business brain.

“He has calculated words, you don’t see it in kids his age today, do you? You know what, I like that kid, I really do, but can he beat Tommy? Definitely not, because what I see in him behind his words is fear and bravado.”

Then, speaking in October, his tune had changed slightly. He explained: “If he [Tommy] can’t beat Jake Paul, I’ll retire him there and then. If it’s a close fight, Tommy’s retired – if Tommy struggles to beat him, he’s retired from boxing.

“He [Jake Paul] is a YouTuber! He’s got to be knocking Jake Paul out. I’m not going to train somebody I’ve got no faith in so I’ve told him, unless you knock him out, pal, forgot me with the boxing, I’ll walk away.”

Tyson Fury has also praised Paul in the past. But when it came to the pre-fight press conference before the YouTuber’s scheduled bout against his brother Tommy, Fury didn’t mince his words.

Could a fight with either man actually happen?

At 33 years Paul’s senior, we can’t imagine John Fury stepping back into the boxing ring.

He was a professional boxer himself during the 1980s and 1990s and a bare-knuckle fighter.

He retired with a professional boxing record of 8-4. The 57-year-old fought for the BBBofC Central Area Heavy title in 1989, losing to Neil Malpass on points.

His penultimate fight before retirement was a defeat to future WBO heavyweight champion Henry Akinwande on points in 1991.

Meanwhile, Tyson Fury is currently focusing his attention on a potential bout against Dillian Whyte for the WBC heavyweight title.

It would be highly unlikely for the ‘Gypsy King’ to step inside the ring with Paul anytime soon – not at least until the 24-year-old gets a lot more experience and gets some big wins under his belt.

If Paul can continue his upward rise, though, there may come the point in the future where a bout between the pair is potentially on. It would certainly be worth watching, if only for the pre-fight trash talking.