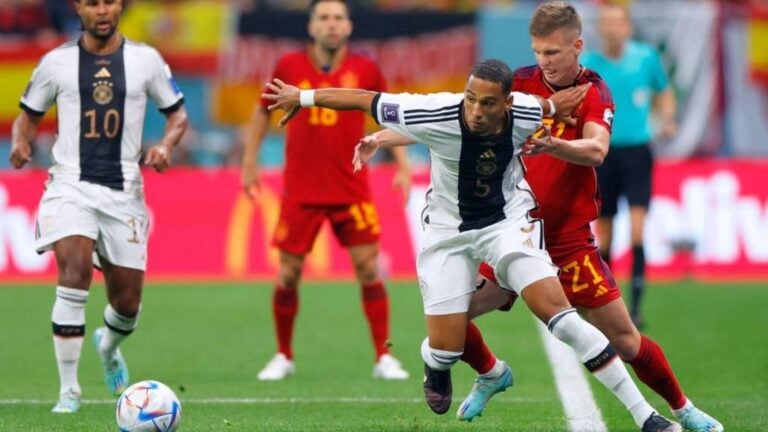 The fifth World Cup meeting between Germany and Spain ended in a deserved draw. Despite only taking 1 point from the group stages so far – Germany could still make it into the Round of 16. Spain vs Germany: 1-1.

Group E has already seen stellar clashes in this men’s FIFA World Cup. There was Germany’s nail-biting loss to Japan (1-2), Belgium’s surprise defeat to Morocco (0-2) and, of course, Spain’s crushing of Costa Rica (7-0).

Tonight, however, Spain extended their lead at the top of Group E, while Germany found their first point of the tournament.

Spain vs Germany: a potted history.

Spain is a dominant nation that Germany is all too familiar with. Despite drawing 1-1 this evening, it does mean that Spain extends its phenomenal unbeaten run against Germany.

The latter hasn’t beaten the former in a friendly match since November 2014 or a competitive meeting since EURO 1988!

How the two teams squared up.

Team-wise , Spain only made one change to the starting XI that beat Costa Rica. Germany however made two changes to the team that lost against Japan.

The first half: Spain pressed while Germany’s goal was ruled offside.

The first half of Spain vs Germany saw the former pressing hard while switching play to confuse. However, some sloppy balls and misplaced strikes from Spain allowed Germany a comfortable, counter-attacking place in the game.

Spain’s first chance at goal came in the 22nd minute. Sergio Busquets played a wide left ball, but Jordi Alba couldn’t get on it correctly. It was ultimately shot wide of the goal.

14 minutes later was Spain’s second and last chance of the first half – with Olmo squaring the ball for Ferran Torres. Despite ultimately missing, Torres would have had his goal ruled out anyways for offside.

Germany then had a spell of bad luck. In the 37th minute, German defender Thilo Kehrer was shown a yellow card. Then in the 40th minute, VAR ruled out Antonio Rudiger’s goal for offside.

The first half concluded with Busquets being booked for a poor tackle on Jamal Musiala and two minutes of extra time being added.

In the second half of Spain vs Germany.

Back underway in Qatar, the second half saw Torres heading to the bench in the 54th. His replacement Alvaro Morata made an instant impact. He scored the first standing goal of the game just eight minutes after being subbed on. This also marks Morata’s 29th goal for his home nation.

The final 45 minutes also saw a couple of yellow cards given to Germany. Goretzka was booked in the 58th for a foul on Marco Asensio, while midfielder Joshua Kimmichi was shown a yellow in the 60th minute for a poor tackle on Dani Olmo.

There was also a plethora of substitutions from both teams. A double change was made in the 66th minute for Spain. This saw Asensio and Gavi leaving the field. Koke and Nico Williams replaced them.

Germany finally get their goal!

Four minutes later, Germany boss Hansi Flick attempted to get his team back in the game with a triple substitution. Ilkay Gundogan was replaced by Leroy Sane, and Thomas Muller was subbed out for Niclas Fullkrug. Thilo Kehrer then came off for RB Leipzig’s Lukas Klostermann.

Thirteen minutes later, one of Flick’s decisions paid off. Musiala delivered the ball to Fullkrug, who sent a screamer past Unai Simon. Scoring top bins feels different on the men’s world stage.

Another round of subs followed Fullkrug’s goal. For Spain, Alba was replaced by Alejandro Balde. For Germany, Serge Gnabry and David Raum were replaced by Jonas Hofmann and Schlotterbeck.

Six minutes of injury time was added to the game. Unfortunately, neither team capitalised on the extra moments, with the final result ending in 1-1.

What’s next for Group E?

This draw for Germany won’t be what they wanted, but 100% better than their greatest fear.

Had they lost, it would have marked the first time the nation had lost consecutive group-stage games in the same competition. A close call.

Thanks to Spain vs Germany result, it looks like the former will still sail through to the Round of 16. However, they won’t officially seal their place until they face Japan on Thursday, December 1.

On the other hand, it’s now possible for Germany to advance to the second round of the tournament. They need a big win against Costa Rica and hope that Japan loses to Spain. The odds may be stacked against them, but it isn’t over yet.

The final score of the Group E Spain vs Germany match is 1-1.