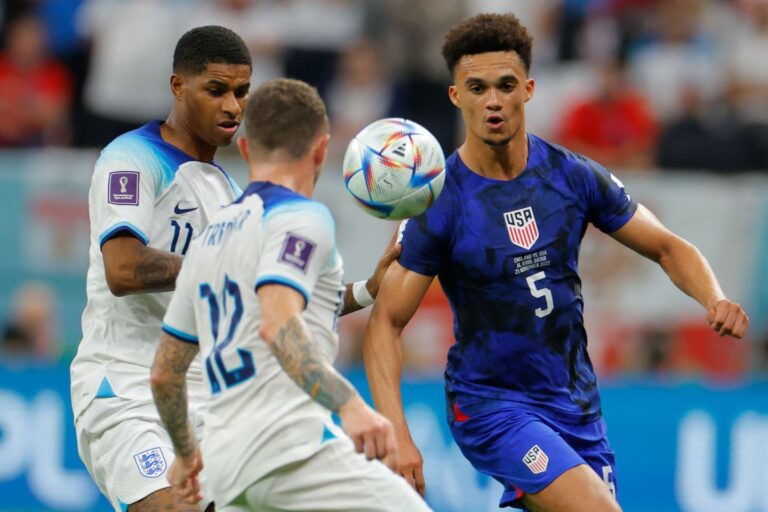 England had a difficult time of it in their second World Cup group stage game, drawing 0-0 to a dominant USA side. The England vs USA match was disappointing for the former, while fantastic for the latter.

Despite reaching a stalemate at full-time, the USA showed that they’re fighting for their place at the 2022 World Cup.

Amassing nine shots and seven corners, the USA will be pleased with how this match has gone. However, England will be looking to regroup after a frustrating game.

How the teams squared up at a first glance

England’s starting XI remained unchanged from their 6-2 victory over Iran. Interestingly, this is the first time Southgate has kept the same starting team, match-to-match, in 53 games. Also included were captain Harry Kane and Harry Maguire. The latter picked up his 50th England cap.

It was previously unknown whether Kane would be ruled out of the England vs USA match due to sustaining a minor foot injury in Monday’s game. However, the skipper started alongside Jude Bellingham, Mason Mount and Raheem Sterling.

On the other hand, the USA made just one change after their 1-1 draw against Wales earlier in the week. Head coach, Gregg Berhalter decided to swap out Josh Sargent for Haji Wright.

Just before kick-off, England took the knee for the second time in the tournament. However, despite starting with the ball and having the majority possession, the Three Lions didn’t quite capitalise on their chances.

The first real moment for the USA came in the 15th minute after Fulham’s Antonee Robinson broke away from the pack.

Despite missing the mark when it mattered, the team came close to another chance to slot it home in the 33rd. Luckily for England, the latter shot by Christian Pulisic bounced off the crossbar.

With a high backline and a strong front three pressing England’s tried-and-tested defenders, the USA managed to keep England on the back foot for most of the first half.

However, neither team capitalised on the extra minute. The first-half ended in a stalemate.

Second half: Substitutes and USA corners

No changes at the break saw a slow start to the second half. The USA quickly picked up where they left off while England struggled to match the pace.

In an attempt to rejuvenate the game, Southgate made a double substitution in the 68th minute. Sterling was subbed off for Manchester City’s Jack Grealish. In succession, Bellingham was replaced by Jordan Henderson.

Immediately making an impact, Grealish’s first touch looked promising as he dribbled past four USA players, before running out of space. From the moment he was subbed on, Grealish made his presence known on the left.

In retaliation, the USA made their first subs in the 77th and 78th minutes. Weston McKennie was replaced by Brenden Aaronson. A disgruntled Sergiño Dest then came off for Shaquell Moore.

Southgate also made another change, swapping Bukayo Saka for Marcus Rashford in the 79th.

Maguire achieved his sixth-headed clearance of the World Cup before the USA made another double substitution. Timothy Weah came off for Giovanni Reyna and Wright was replaced by Josh Sargent.

England has their chance but miss where it matters

The 87th minute saw Rashford attempting to curl the ball into the back of the net. However, USA’s goalkeeper, Matt Turner caught it.

Four minutes of stoppage time was added to the second half of the England vs USA match. Maguire met a great corner from Newcastle’s Kieran Trippier, but the ball failed to find the back of the net.

Another chance came a minute later when Grealish was awarded a free kick. However, Kane put too much pressure on his header, allowing the game to end in a disappointing 0-0 draw.

When is England’s next World Cup game?

The USA retain the title of never being beaten in a World Cup by England. This game also makes a great case for them getting out of the group stages and into the round of 16. They face Iran on Tuesday 29 November.

England however will sail through to the RO16 as long as they don’t lose 4-0 to Wales on the same day.

Let’s hope Southgate’s side regroups and reevaluates before then.

Freddy Adu makes shock prediction ahead of England vs USA